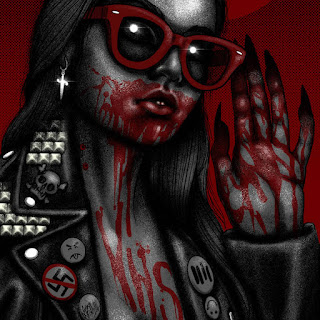 A death metal band from Canada who made an album about vampires, how could I not give this a listen. In my head I hoped they would be more committed to creating the kind of eerie moods that Acid Witch does but despite being a little more song focused on the opening track they kind of fall into what might as well be another Cannibal Corpse clone on "the Frog Brothers". While the title of the song implies the Lost Boys connection there is little else in the grunting to clue you in on this. They do improve on this with "Undead Casanova" and by improve make it more song focused nots scarier sounding though metal in and of itself invokes a scary feeling.

Trevor from the Black Dahlia Murder lends his growl to several songs one of them being " Horror of Dracula" , which to honest, once we get into this kind of guttural vocalization it is hard to tell him apart from this bands own growling.  I do like what these guys are doing better than any BDM album I have heard in recent memory. I always found that band underwhelming. These guys to their credit do not get so consumed with their need for speed that everything sounds the same, " Horror of Dracula" grew on me in my second listen.

Rock n roll influences rear their head on " a Town Called Purgatory".  The song however does go down a more color by numbers death metal formula. Dave takes over the growling on "Immortality Comes With a Price" , The growls are a little lower is the only real difference. I like the groove to this one more every 90s sounding.  They finally deliver something closer to what I was hoping for on "Martin, Martin".  This also comes with them slowing down into more of a death doom pace. They kind of carry this over into the next song thought it is not done as perfectly. The last song has some heart to it's songwriting so I can live with that as it is catchier than just pounding straight ahead. I will give this an 8.5as it works and catchy enough that is is a fun listen for sure.