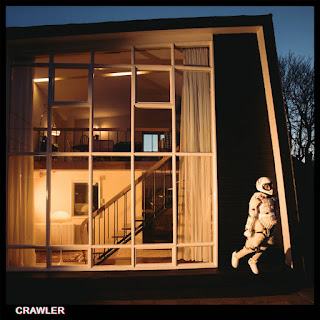 The opening of this album makes you re-think what kind of punk you might be expecting from these guys.  The vocals are much improved, the belt out 'are you ready for the storm' with the kind of whiskey fueled passion Nick Cave would be proud of. Then things take a booze drench punk into a more meat and potatoes British pub punk feel. They split the difference between the first two songs, remaining angry, but using more subtle sonics with a darker feel. The more experimental side comes out with the almost rapped "Car Crash". The production is more dialed in even when they are taking an intentionally lo-fi turn.  'the New Sensation" sounds the most like their previous album of the first five song.   Chanting the same phrase to a fever pitch is part of this album's formula for sure.

"Stockholm Syndrome" is my favorite song so far as it takes his ranting and channels it in the most effective manner yet. It proves they can still do what they do and be catchy.  The singing has a little more passion on "the Beachland Ballroom" though not as catchy as the previous song. The same thing could be said of "Crawl" which has more of a rock n roll drive. " Meds" thrives off the bass line and they get weird enough to bring a sax. Which is still punk if you think of the Stooges. Things break down to acoustic guitar going into the almost Doors like "Progress". I think it because that means it is darker, more melodic and soaked in atmosphere, as well as one of the better vocal performances.

"King Snake" works off another drunken groove while almost being too British for their own. good. While the have a bigger sound that owes more to the Clash, they are also more aggressive on the last song. It works pretty well, and finds them once again falling into the rock side of the punk rock equation which I do not have a problem with at all, it means they are once again refining their song writing. I will give this album an 8, it is better than most punk you will hear these days Though maybe not the best.