Face to Face : 'No Way Out but Through" 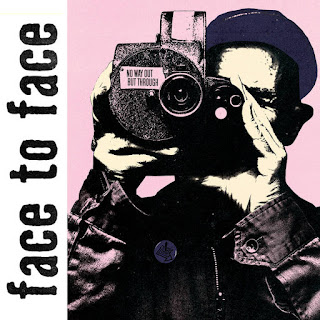 I have not listened to these guys since the 90s, well at least on a regular basis there might have been a moment of weakness or three where I got nostalgic for this kind of 90s punk or perhaps was making a list for one blog or another that asked me to dip back into these years. Not much has changed and it plays to their favor. The first song with hookier and more melodic than when they default to the faster though more punk sound. The third song confirms we are not getting much in the way of new tricks but not sure much of that would have been wanted in the first place.  It is like the average between the first song and the second, though with an almost ska like bounce to it. The bass player seems to be the most on it He adds an underlying melodic sense , the vocals fall where you would expect them to most of the time. This is the sort of thing that became emo,

"Anonymous" has a much more straight forward feel to it. It works for what they are doing but is not what I call their strongest song writing. This reminds me more of the path the Get Up kids went down. Though they are not as emotive. I think what I liked about this era of punk was the more emotive feel since it was less happy sounding than most punk. Once again, this bass player saves the day.  Some of this darker sound perhaps tempered with a Bad Religion feel can be heard on "Ruination Here We Come", this works better for me than the happier sound of "Long Way Down" . It sounds like the bass player came up with the riff to "Vertigo-go" , if that is the case, they need to let him write more of the songs.   It is more upbeat than some of the other sounds I have preferred from them, but it works. "You Were Wrong About Me" works off the kind of winning formula that made this music memorable in its heyday.

"Spitshine" is drum driven and runs on the kind of gas that flows through more rock influenced blue collar punk like Social Distortion , so they are showing they can do a little bit of it all. The bass player once again shows that he is the glue along with the drummer to give this band one of the strongest back bones from the 90s. punk scene. Even with all of this "This is My Vanishing Act" could use vocals that do a little more as everything begins to take on almost too uniform of a sound. The last song is more up-tempo, but with textured guitars and vocals that a little more room to breathe.  I will give this album an 8.5, wish I had more time before the end of the year to see how this grows on me.  They do prove they were one of the better bands from this era.