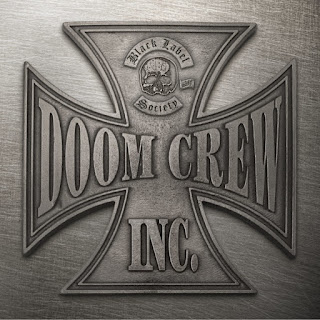 The chug is powerful, and Zakk continues to use his blues inflected belt, though none of those elements lends themselves to coming across as being doom as suggested in the album's title, it is aggressive enough to be metal, at least by the 80s definition of the term. His playing is still Ozzy quality and there is a ton of Sabbath influence to be found on "Destroy and Conqueror".  It has that mid-tempo "Fairies Wear Boots" groove. There is a great dynamic shift on "You Make Me Want to Live". The guitar playing is of course going to be the high light of this album as Wylde has proven himself as one of the best metal guitarists out there. "Forever and a Day" recalls the kind of piano driven power ballads that bogged down the "Use Your Illusion" albums but manage to work here.

It is when Wylde steps away from the Ozzy influence and does his own thing that he shines the most as "End of Days " is the best song thus far on this album and it has more of a heartfelt grunge moodiness to it.  He knows there are certain expectations of his fan base who know him from his time with Ozzy thus making songs like "Ruins" obligatory.  'Forsaken " kind of splits the difference between his two sides and works better as a song. His singing shines on the 2021 reworking of "Love Reign Down". He has shown us before how soulful he is capable of being this is just a reminder. Then we are back to the Sabbath riffage on "Gospel of Lies". Having spent awhile on the road in his own Sabbath cover band, it is easy to see how it continues to rub off on him.

We get another glimpse of him not paying homage to Sabbath on "Shelter Me". If not for his thick metallic guitar tone this would sound like an almost radio friendly rock song.  There is a more blues soaked feel to "Gather All My Sins" when he is not winking in the direction of Ozzy's old homeboys. I mean he could have come up with a better title than farewell ballad to close the album with, but the guitar playing is pretty great. Not the best ballad on the album, but it works well, and the harmony vocals came out smoothly. He is an old pro so the fact the production and sound quality are top notch should go without saying. I will round this one down to a 9, as it leans heavily on his legacy, but it is a pretty incredible legacy to have.