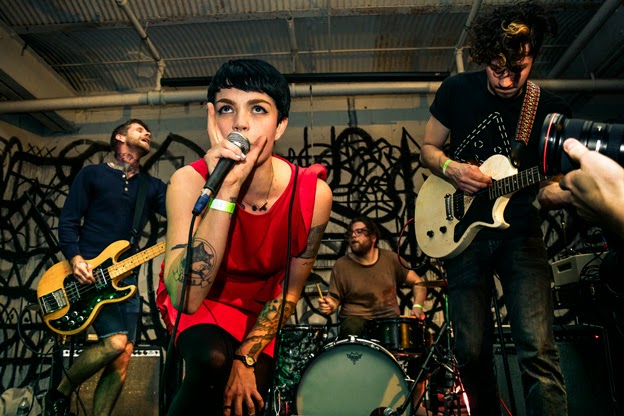 They are much better than Pussy Riot. This New York band formed in 2012, and the name alone is getting them a lot of attention. Their music, is anti music on songs if you want to call them songs like "VII" , but on songs like the opener "Driver" their is a sense of cohesion and it all makes sense. They are volatile, Meredith Graves, is as aggressive as any female punk singer in recent memory.

The very lo-fi nature of what they do is the element I have to acquire a taste for.It's not as far removed from what I sometimes listen to as the hippest of the hipsters might want to think of these guys, they are not unlike Sonic Youth or P.j Harvey in either's more chaotic moments.

When they flirt with conventional songwriting they show a lot of promise, "Big Stars" surprised me as it's a very good song , that flows well despite it's jarring energy. Once I got use to this the punk rock spasms of "Work" made more sense to me. It's funny how I can listen to prog all day long no problem , but when it comes to something as simplistic as the quirky noise these guys make I have to rewire my brain to wrap my head around it. I think a song like "Dig" they bashed out giving little thought to the fine points of songwriting and the lack of detail doesn't .

Most of the songs are quick in and out wham bams at about a minute, when they linger longer and give themselves chance to establish something like the very Daydream lull of "Interference Fits" leads you into the more punk temper tantrum it builds into.One of the longer songs is the 5 minute "Advance Upon the Real" is more noise than song, which just kind of takes up space for no reason, though the elements of song they start with are like angry Kim Gordon fronted Sonic Youth. The song returns later in the album for a more noise laden reprise. .

"Bells" is discordant and starts with a live sample of the singers dialogue making the song feel like it is live and the way this album is recorded its hard to tell if it is or not. "III" follows a similar sonic path though the vocals seem to actually have a pattern to them.The clang the song takes on as it is battered back and forth has a charm to it as clumsy as it is. "I" feels like it hold some of the similar melodic themes in some of the sound layered in this distorted tempest.

I will give this album a 5 as it falls short of really being songs, I think as this band matures and deepens their need for songs and melody in the direction of "Big Stars" that they will be onto something. For now this isn't my thing, but I appreciate some of the notes they hit.