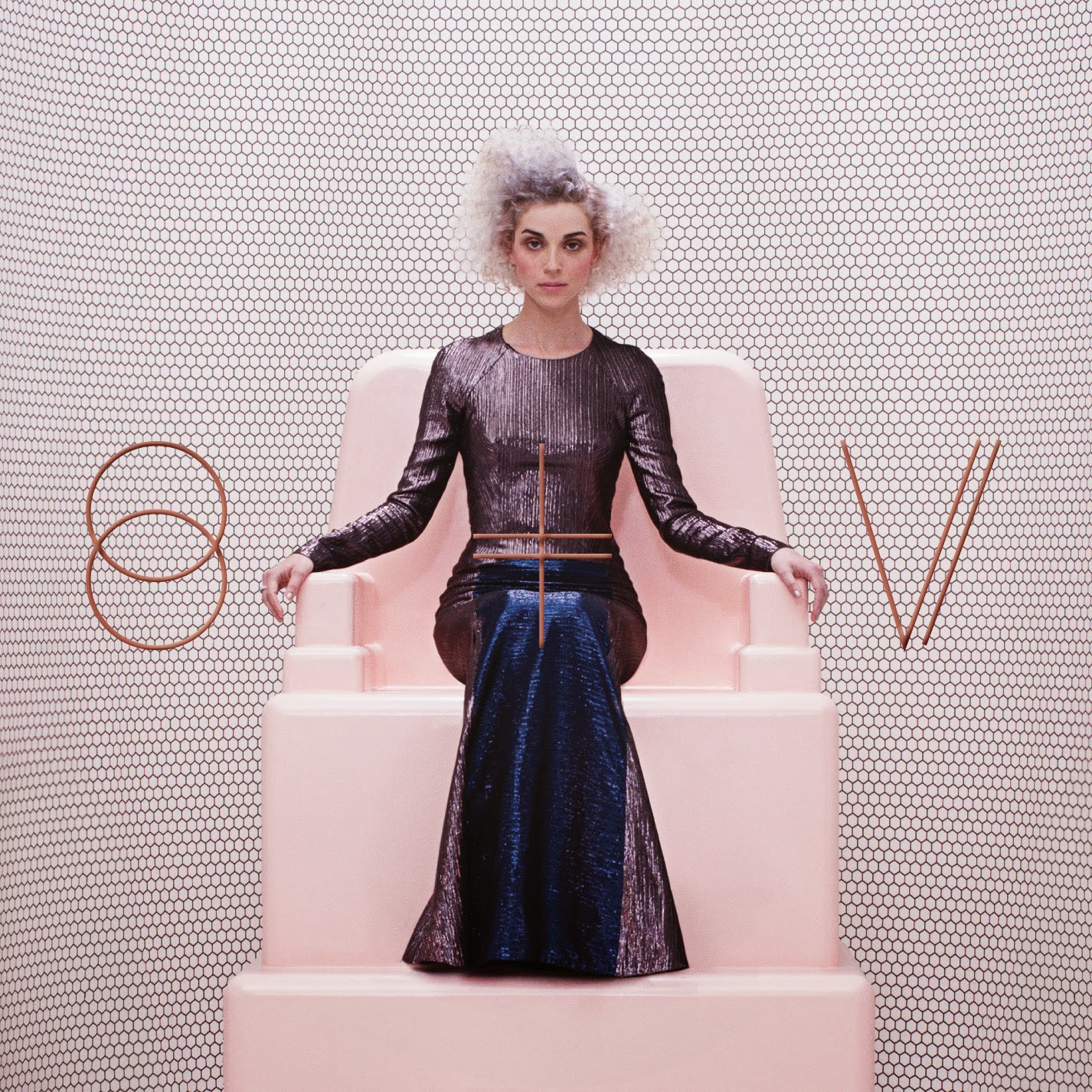 Annie Clark earned her place on her by contributing vocals on the new Swans album, but she has also collaborated with Talking Heads front man David Byrne, so she runs in some illustrious Manhattan circles. This electro pop weirdness on this album is not unlike that from Bowie's "Scary Monsters" album. This is her 4th solo album, she got her start with Polyphonic Spree, though there is hardly a trace of their happy hippy pop.

The first single "Birth In Reverse" an ode to her bi-polar disorder, is poppy enough for the hooks to do their job, but not screaming sell out by any means.John Congleton of the Paper Chase produced this album. Clark calls it a part album you could play at a funeral, and I don't here this until the 80's synth ballad "Prince Johnny". It reminds me at times of Cindy Lauper. Despite having the talents of the drummers from Midlake and Sharon Jones and the Dap Kings on the album, most of the percussive elements are programmed.

Though I would not call his album goth or dark wave as it's in the same sphere as maybe Imogen Heap, it still has the depressive undercoating to off set the more manic dance tendencies. The close to acid jazz "Huey Newton" might not carry the despair of Portishead, but expresses similar emotions. Normally electronic based music has a more plastic coating , but this album still manages to evoke a broad scope of emotions.

If you caught her performance on Saturday Night Live then you heard the very Prince influenced "Digital Witness". This vocal lines are also Sinead O Connor in the way the fuse quirky solemn phrasing with pop gloss.  "I Prefer Your Love" has kind of a "Nothing Compares 2 U" feel , but it is not as well crafted and is the first song that doesn't hit me on first listen.Lyrically I appreciate it. Her melodies are still better than whats on the radio today, but is the first awkward moment of the album.

Redemption comes in "Regret" a pop song of sorts that carries more punch, though her trademark seems to be to float out of  the groove in a more airy vocal line. It is some of her best guitar playing on this album. The song is arranged as a call and response. The song that resonates most with me on first listen is the often
acapella "Bring Me Your Loves" it has a dose of funk in space, that coils around her vocal acrobatics.

For the songs to be called "Pyschopath" it is very happy. The pulse of it is is cheerfully tense. The lyrics convey a similar state of mind, though bi-polar in they dynamic in way the chorus of this song juxtaposes it self against the pulse.The song works though it's not my favorite on this album but works better for me than "I Prefer Your Love". It's sense of movement keeps it going and compliments the often upbeat feel of the album. But she is upbeat in a similar manner to Xiu Xiu's more song oriented efforts.

The groove to "Every Tear Disappears" is pretty decent, but after you have delivered some pretty stunning moments, I think pretty decent isn't maintain your stride and falls more towards filler. I think the fact the vocal lines don't have the same attention to detail given in their construction is what keeps this song from soaring. The Sinead O Conner vibe returns on the slower paced "Severed Crossed Fingers" . As far as the albums slower moments go this song is stronger than "I Prefer Your Love".The melody is more defined and the music kinda floats behind it forcing her vocals to do most of the heavy lifting, but in this case it works.

I will give this one a 9.5 . I might grow on me, the songs I was lukewarm on were still good, they just didn't contribute to what I felt to be the album's momentum. The more amazing moments balanced things out and make this a pretty fun listen overall ,