A Pregnant Light : " Before I Came" 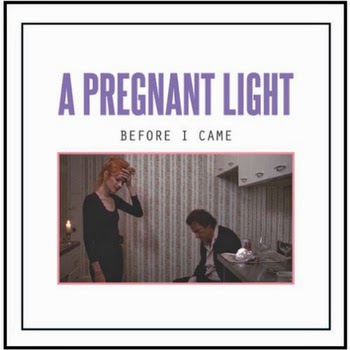 This one man machine is  good even though you will get a migraine trying to figure out if this is black metal or hardcore. It is impressive this is the work of one mind as all the the elements that interlock so well sound like they come from a band that embraces the individuality of the diverse backgrounds. "Lilajugend" has a organic strum of guitar to it that sounds like it doesn't come from the same place as the more hardcore opener.

Of course I like the fact the clean vocals on this have a post-punk feel to them. This is a compilation, but having just released splits and e.ps of sorts I think this counts as a proper album to those of us who aren't going to hunt down all those 7 inches.

The strum of guitar takes on a similar almost Smiths like feel on " Heat Makes These Flowers Grow" this is also the first song where I can hear an element of depressive black metal in it amid the rock chords. It is also surprising to me that this project hails from America much less Michigan. In fact the band spoils you so when they launch into a more straightforward blend of black metal and hardcore it feels like a let down because you know they are capable of more, though it is still catchy and atmospheric enough to please Deafheaven fans, even when he launches into a more Rollin like howl on their namesake track.

"My Life Outside the Party" starts off like emotional hardcore from the late 90's. The guitar melody is cool but still could be from that musical era as well, it's the more post-rock swell that the song takes on that brings it up to date.This also creates another Deafheaven like moment. This is more focused on the hardcore than the beauty..Some of the experimentation on the marriage of sounds goes wonky on "Glint Glimmer and Glow" though it isn't a bad song just a weird Frankenstein of one when it stumbles out on borrowed legs.

There is almost an Amp Rep style stomp in the  unwieldy flail of " The Heavens Alone in Love". The stomp has guts and character carrying the riff into the realm of song. It is left to the mercy of the blasting to transition it in and out of this sonic rumpus.It is the more subdued breakdown in the middle of the song that wins me over. Any one can bang out riff, but creating feeling and melody takes a more artistic touch.

A twenty minute "DeathMyhangingdoorway" closes out this album of sorts, it starts much differently than the lo-fi cvltlike production of the re-verb cavern of black metal it leads to.He employ tempo changes and clever accents so it never falls into what you might called typical black metal. I do wish for the time you invest in listening to a twenty min song that it was better production wise, but maybe that is the effect he was going for. The sound clears up for the acoustic interlude in the middle of the song and the distortion tightens slightly for the pounding that follows which reminds me of a Mastodon riff.

I'll go ahead and round this up to an 8.5 as it is a clever monster he has created, some of the imperfects give it the charm this collection of songs carries, I would like to hear a proper full lenth from him as it seems the conceptual sphere of it would be up his alley as well as mine.