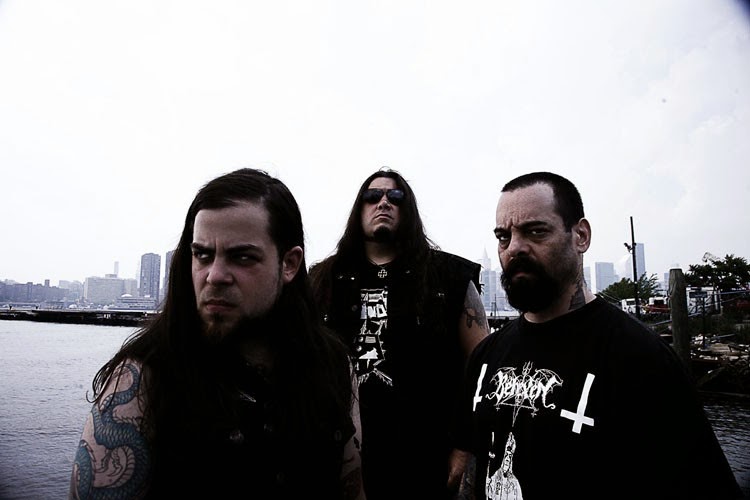 Managed to get a few words in with Paul of Black Anvil in regards to their newest release "Hail Death" and it went something like this.

Wil - The New Album "Hail Death is Great" it's a huge step with a lot of growth for you guys. I was surprised to learn J Robbins of Jawbox produced what was it like working with him?

Paul - He is a great guy and a genius at his craft . I have done something with him before in the past and originally we had planned to record with Devo from Marduk. We were going to go over to Sweden, so it would have been in a different country and totally different experience , but  it fell through. So this came into being. What was cool about this is he had done nothing like this before, but after listening to the demos he totally understood.He was able to hear what we did on the demos and translate it to a bigger arena.

Wil- Do you think working with him brought out more of your hardcore roots ?

Paul - No, I think this is slightly different. I mean possibly from the powerchord chord riffing you could hear that but even Metallica does that. I think we strayed further from that. There is more of a rock n roll element. In the production I think there is a live raw sounds that is big but still punishes.I heave read stuff on the Internet and I  should know better and stay off there, but I read some review brings that up in the first line. There are gang vocals , but there are gang vocals on some Dissection albums. It is more like a million soldiers. A bold army, not done with any intent to follow a curriculum or tough guys in cargo shorts.

Wil - I heard this album tells a story. What are the thematic elements of that story?

Paul - I was going though some shit. Sometimes life gets in the way and you can choose to either be crushed or  rise to the occasion and crush it .That is what I choose to do. The end result is all that matters. I chose to separate my self. I became somewhat of a hermit and dove into all the arranging.  I withdrew , but in a fully functioning sort of way.  I chose to stay in close. It gave me than chance to look at it from the fans spect . If I was a fan what would I want to hear, but in a calculated way. It was natural. I mean if I put a bullet in my head today , I would be going out on a high note. I an the proudest of this more than any other thing in my life.The lyrics do tell a story maybe not in a linear manner , but it's about life and death and our journey where death is the ultimate reality.

Wil- Speaking of thematic albums, you guys to chose to cover a song off of Kiss' music from the Elder album, what brought about that? it's a fan album when it comes to Kiss.

Paul -There is an infinite list of songs we would cover. It would look like the opening sequence from Star Wars scrolling up the screen. I liked that entire record, growing up I got it at a time when I didn't know any better, I had to get it as an import , and thought it was cool because it was so hard to find. Its stood the test of time. Last tour we had it on playing in the van and one of the guys said we should cover it and bam it was a done deal. It one of those cases where a standard might not work, the songs kinda pertains to the vibe of the album.

Wil -What are your plans in regard to touring in support of this one ?

Paul - We are going to do a record release show in New York. We decided to wait until July to do it because the album is a lot to digest, so we are going to play the album front to back in it's entirety . It makes the most sense to to it that way. In the fall we were supposed to play a tour with Mayhem and Inquisition, but now we are looking to go on a tour with Skeleton Witch and Ghoul in September, which should be cool , but who knows we might prove to be the odd band out on that one , that always sort of is the case.

Wil -What is it about New York that makes its so conducive for all this killer black metal to come out of it ?

Paul- We don't pay attention to any of that. We don't really do any scene sort of thing , and I don't mean that in a smoothie asshole sort of way , though I suppose by saying it it makes me a smoothie asshole. But we have allies . We are friend's with Mike Hills from Tombs and others , but we don't think of ourselves in that regard.
.