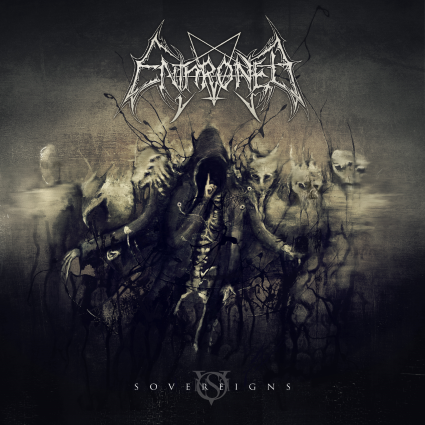 If you don't know anything about Enthroned then we are learning together. As the bits an pieces I heard in the past I liked, but I sat down to digest their newest album "Sovereigns" with no preconceived notions as to what a full album would entail. The Belgium band has been around since 1993 and this is their tenth album, so it is safe to say they know what they are doing.  It starts of in a very dark straightforward pummel, not unlike say Dark Funeral. The album is varied, the band delves into a similar level of the abyss that Watain walks upon with "Of  Feathers and Flames"  Not afraid to blast into it, they also temper this with dynamics and varied tempos which goes a long ways in my book.

They hit their stride in the stomped gallop "Lamp of Invisible Lights" builds into. I can say there is more ambiance lining the edges of their songs than I expected , though they are a pretty straight forward machine.
They are pretty damn good when it comes to delivering the type of crushing pay off metal heads not only want but expect.They are coming from a similar place as Behemoth , but I think this album works better than the underwhelming Satanist as it is a denser and darker creature.

At three and a half minutes they get to the point while still churning up some dark epic hellishness on " The Edge of Agony". They don't let up on the punishment, giving you room only to admire the beauty before the beating like any good sadist. This sadistic streak is further indulged on the rapid paced" Divine Coagulation" . This song however the band doesn't take on their fine ear for dynamics and let this one go by in a blur with a little bit of a gallop allowed to surface towards the end.

They reprise more of their death metal leanings on the ultra aggressive "Baal al -Maut" . The first two minutes are a pretty good break neck pounding, but they smartly change pace pace to avoid becoming white noise. This doesn't abandon the aggression , but rather adds a melodic layer to it that was needed, to make this a song rather than occultic venting.

They take you out on a blast with "Nerxiarxin Mahathallah" It's pretty single in purpose and the sound that some people only accept as black metal, the layered vocals sound really mean on it, so mission accomplished. As far a first dates go, my heels aren't up in the air, but I can see myself hanging with these guys again, they are very skilled at what they do and the dark density of their sound helps to win me over , as well as they fact they are skilled songwriters, so this one get a 9.