Agalloch:"The Serpent and the Sphere" 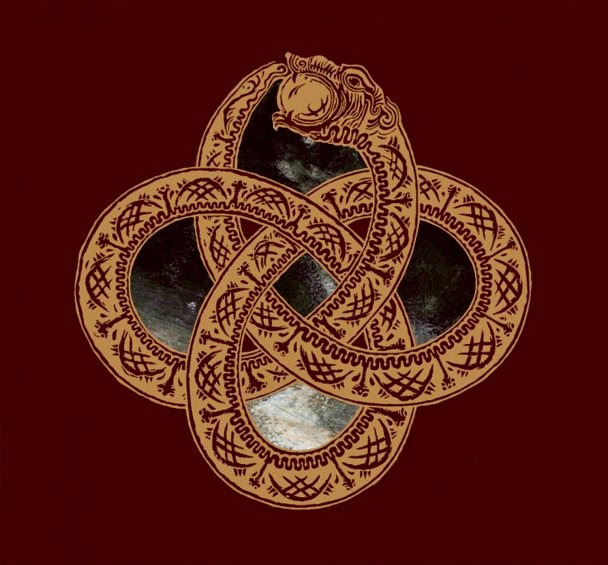 At one time these guys were one of my favorite bands, until they gave me that 20 minute "Faustian Echoes" when I wanted a new album. So here we are with "the Serpent and the Sphere " and it's ten minute opener that's pretty impressive. Agalloch have not totally veered off from their sound, it carries more of a doom sound than black metal. Though they were on the fringe of black metal with "Marrow of the Spirit".

They return to littering the album with folk interludes . Little sideways passages of acoustic guitar are a staple. "The Astral Dialogue" grabs me more than the opener. At five minutes it's pretty to the point for these guys, more mid pace, I'm fine with no blasting as it's still pretty heavy. It makes up for what it lacks in raw fury by being pretty dark. These guys always excel in their guitar playing and this song pulls out some pretty tasteful yet dexterous lines.

For Agalloch "Dark Matter Gods" is a bit straight forward . The drums coast on a more post-rock beat, though the song builds in a more Enslaved manner, or even something as moody as Katatonia could be referenced here. It's original and I can see this song growing on me. I tend to not like his whispery growl as much , which is what dominated "Marrow of the Spirit" , but this one is bravely constructed and has all the dynamic punches required to sell me on it .

There is more of a triumphant stomp similar to what newer Enslaved falls into on " Celestial Effigy" . This is not vastly different from past Agalloch, namely "Ashes Against the Grain". The vocals stick to the whispery growl and as a whole this album is very sparse on the clean vocals in fact they really only appear layered in the background of the first song. This song delivers for what they do so it is hard to argue against it as they are staying fairly consistent with what they do. They even pull out the blasties for a few minutes. The song moves you to head band with ease, but I can't help but think they are playing it a little safe.

"Vales Beyond Dimension" took a fair amount of listens to grow on me, it has a more melancholy feel to it , but the way it's arranged it kinda drifts by. But the dark melodic elements that construct it really make it one of the album's best songs when it finally clicks for you. The use of primarily harsh vocals as the focal point does make many of the songs sound the same in some ways, the guitar lines are creative enough to stand out when you really listen to them, but it you leave this album playing in the back ground it blends like one long song. Which brings us to the 12 minute instrumental that closes this album out.It sounds like they want to go into a more Russian Circles direction, with this though those elements are sprinkled throughout the album, in a similar fashion to how An Autumn For Crippled Children made the transition. The instrumental isn't a bad song , its well played and put together it just feels like it's the crescendo to another song rather than standing on it's own,

I will give this album a 9.5 as the lack of clean vocals, which I though was their strong point are absent. The folk elements are also relegated to the acoustic guitar interludes, but the arrangements are strong and the guys are good enough guitar players to make this album excel on that alone. The drumming has also stepped up a notch, so these guys are still killing it just growing away from some of the elements I once liked most about them, but growth comes in unexpected ways.