Up From the Under Ground: Ras Xix -s/t 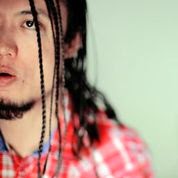 This former Singapore based artist relocated to Austin Texas " Weightless With You" recalls 90's alt-rock in many ways. The vocals are the strongest part of the album and the mix suggests it was intentional to put the vocals up front in your face. This guys influence range from David Lee Roth to Chris Cornell.

The drums on this album are often the unsung hero and they work their way around the rather simplistic guitar lines that are living wide breadth for the vocals. Things back off on "Nora 5" and his more sedate moments remind me at times of Lenny Kravitz mixed with the trashy hotel lobby jazz Stone Temple Pilots dipped their toes into. I can also hear some Red Hot Chilli Peppers beneath some of the melodies, though he is a more competent singer than Keidis. I do think some of the acoustic moments on the album get drug out a little too long.

The Incubus comparisons can not be denied on "Over" though some of the vocal shifts are more like Mike Patton, whose band Faith No More should have been getting a cut of Incubus' royalty checks. There is a much more straight ahead rock sensibility than anything Patton would do. "Simulacrum" touches on Brandon Boy'ds affinity for ballads. The ghost of hair metal gone radio stars Extreme can be heard haunting the way the melodies ride of the the strum of acoustics, as the feel of "Whole Hearted" lingers. 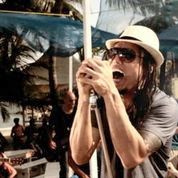 There some great sounds on this album and a wonderful ear for melodies, think however the dips into 90's metal isn't their forte. Though it's not to say this sound is totally dated , I think fans of the post- Panic at the Disco radio rock format , would find something they could latch onto here.Of course around here we have a pretty high bar set for metal, I think this could be rocking the suburbs of your average radio listener.

This album swings between the acoustic rock ballad and the more funky post- nu-metal of 2000. The chorus of "If it's Gone" is well crafted and all of the melodies are pretty convincing in this sphere of the album. I think sound is best realized on "Las Aremas de Catagena" which has more Latin flare to the flamenco picked guitar parts ,that are hands down the best playing on the album. Everything falls perfectly in place here, this is the direction I think the album would have most benefited from, instead of wanting to inspire a mosh pit.

Speaking of mosh pits the angular crunch of "New Religion" is the best stab at that sort of thing, as it allows the drumer to play around the song and doesn't try to hard to make them into unconvincing tough guys. However they use rock as an effective dynamic on the chorus to "Miss Simon". It is also the first time I really take notice of the bass playing which should have been more in my face for what they are doing.

This song leads into "Intergalactic Love Affair" which relies on the guitar playing to convince me these guys aren't just an Incubus tribute bands trying to fly some originals in under the radar. The approach to the guitar on " Machine" does also help to counter balance the more Incubus inspired vocal lines, it even drags them away from going to the more obvious intervals Brandon Boyd would sing.