Ringworm : " Hammer of the Witch" 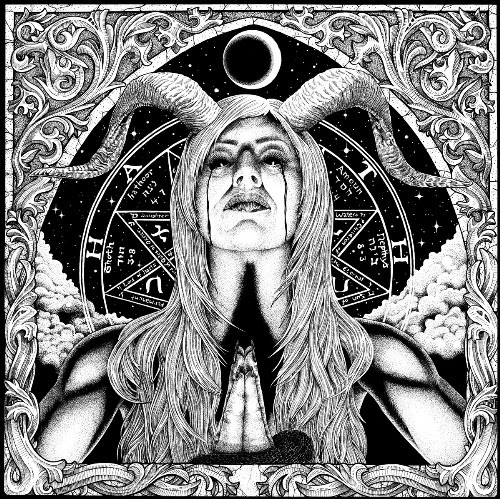 This is the 5th full length by the Cleveland, hard-core band who has taken a much more metal turn since their inception in 1991.  There last album "Scars" sold me on these guys, it was always go go to angry music. It put this one my most anticipated metal releases of the year so expectations were high. This album is not much different despite the fact there are hints of Dissection influence on the opener , but by "Bleed" we are reminded that hard core come from the term "hard-core punk" as the punk element is more present than a need for breakdowns. This is still chock full of gang vocals and the straight forward sprint of the snare characteristic of punk drumming. I appreciate the fact this really takes me back to the punk - metal crossover of the 80's where bands like D.R.I, were blurring the lines between the two . The solos are much more metal , even Slayer inspired on "Leave Your Skin at the Door". This album does retain the mean snarl the others have and is consistent for the band, some of the metal elements might even just come from the fact these guys have grown as musicians, as the old saying goes once a punk bands learns how to play they start playing metal.

The riff to "Exit Life" threatens the cool riffs don't make a good song rule we have here. The vocal accents are like stabs in a knife fight so that helps the case . The production on this album is awesome for sure, the vocals benefit from it as there is a fine layer of distortion plugged into the performance and run through a filter of some sort. "Psychic Vampire" is almost too straight ahead hardcore for my tastes, until the riff entering the first minute cuts in. "King of Blood" feels a little less inspired despite the rapid chug fest and comes across a little like filler, rather than actual songwriting that allow the song to form an identity of it's own. .

The thrash vibe consumes this album, there are cool accents on the title track, that would cause hardcore dancing to break out in line in the supermarket if this was on your iPod. I think thrash fans that would be quick to dismiss the band as hardcore will be missing out. The thing about the album to me is while it is bursting with confrontational energy it doesn't strike me as being as dark as "Scars" , so when I am in my more depressive state it seems like baby sitting a hyperactive child and requires more energy to sit through it than I can muster. The Kerry Kingisms run rampant, and fans of Slayer and Hatebreed or if you are in Atlanta Death of Kings, alike would do themselves well to give this a chance. There is plenty of blatant metal moments like "One of Us is Going to Have to Die" , but the hardcore moments sometimes clutter them up like clichés. I find myself tempted to skip ahead on " Vicious Circle of Life" to search for more appealing sections.

The albums does hide some great moments like the S.O.D like groove to " Die Like Pig", that swings into a more modern hardcore style.Here some honest to god songwriting crops up and shows that this is what needs to happen. The riff to "Height of Revelation" hold more hook than most of the album, the accents are solidly arranged. These guys are still good at what they do , this album feels like a side ways step while smiling back at their Slayer collection, I'll give it a 6.5, round it up a point if you are not a depressed person with this sort of energy to spare.