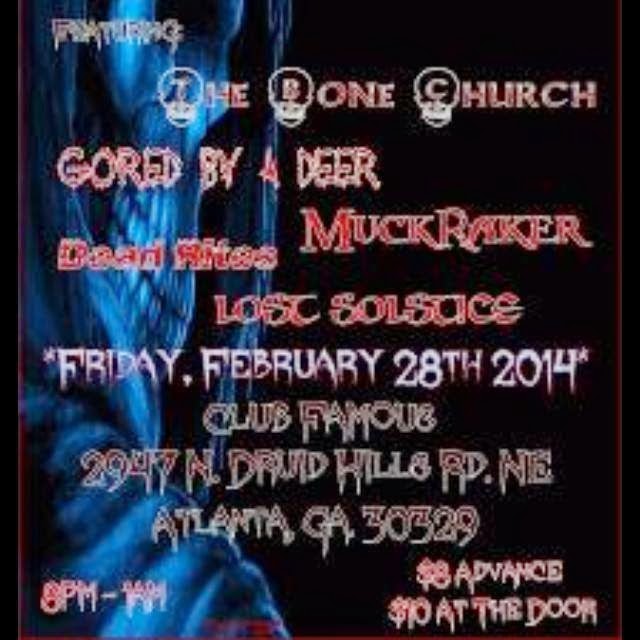 My experience with local shows outside of  the typical East Atlanta venues is limited , despite the fact I live out in Sandy Springs. I have hit Sweetwater once and North River Tavern a handful of times all to underwhelming results. So venturing down to the Emory area to Club Famous aka Famous Pub for the "Purveyor of Mayhem Metal Fest" was an impulsive change of scenery for me.The bands coincided with my drinking for the night as the first drink was strong then watered down until last call. 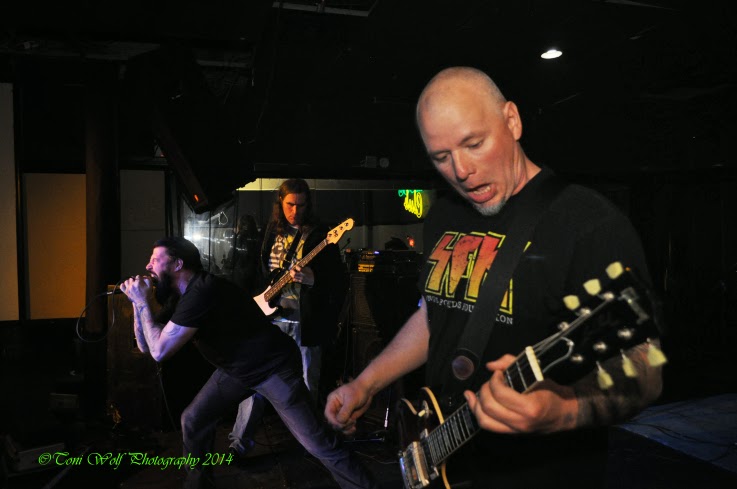 The bands coincided with my drinking for the night as the first drink was strong then watered down until last call. The openers Lost Solstice, who was shocked to hear was playing their first show together, seemed to focus on sounding evil and dark, their moments of aggression came across more like Patrick Bateman from American Psycho than an axe murder gone berserk. Their songs went into unexpected places, that  their singer morphed his voice to fluidly suit. The clubs PA was lacking, but Lost Solstice were troopers and played through the technical glitches. Lost Solstice's sound could be best summed up in how my fellow drinkers described them like the blind men and the Elephant, each had their own opinion based on what part of their set they were struck by as comparisons ranged from Tool to Black Flag to "the Cure meets the Exorcist" . 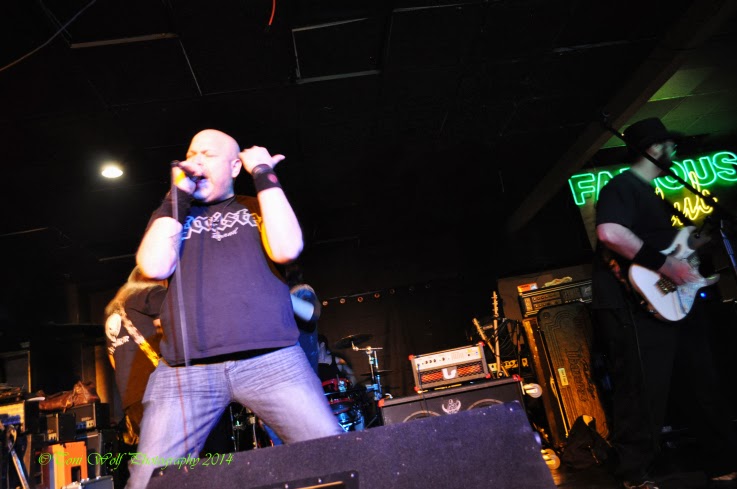 Next up was Dead Rites, came across  like a more Hot Topic take on what Muckraker would do after them , but it would be hard pressed to call them goth, in fact the lumberjack looking Lost Solstice was closer to goth than Dead Rites. Dead Rites might have gotten the best mix , but reminded me too much of the first Misfits album without Danzig on it that came out senior year of high school and I'd rather forget that. They band seemed cluttered on the stage despite their singer's best efforts to take command. Their merch seemed to be selling pretty well and at least two of the other bands were wearing one of their shirts , so they do have that going for them. 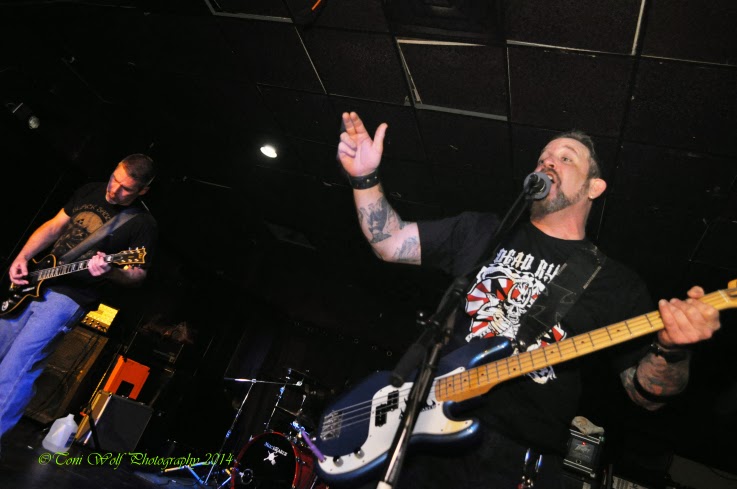 Muckraker tried harder to hit rock start poses than act naturally on stage. They reminded me of Godsmack and all the things about Metallica that inspire me to turn the station whenever they cross the XM dial. They fell closer to what I expect from suburban rockers in Atlanta. They did inspire me to switch over to domestic draft beer and hunt down greasy tater tots. Sound wise their songs were not hampered by the club's murky sound, as every thing was straight up power chords banged out in a manner that did not demand finesse. There style of rock was so straight it could have used a little chaser, but they were certainly into playing it and were giving it their 100 percent. 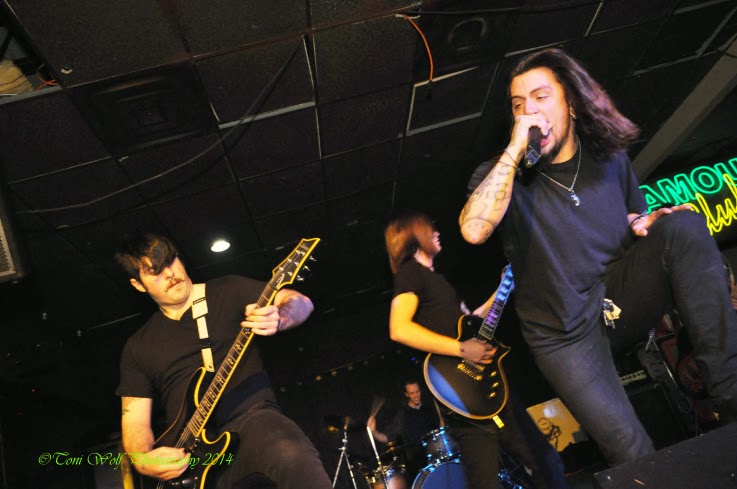 The domestic beer and the watered down shots that followed, made my head hurt too much to really give  Gored By a Deer my full attention, but I got enough of an ear full, to catch their punchlines.  They played a style of metal that once populated places like Swayzes. I would be surprised to hear that these guys were not from Cobb County. They sported the hair styles you would expect of the KillSwitch Enagey kind of teenage hardcore, they played well, but reeked of the kind of bands that use to send me friend  requests on Myspace. Too hard to be emo, but not enough hair on their chest or testicles to sell me on them being metal. I'm sure there's an audience for them some where, one drunk next to me suggested they should listen to more Slayer and stop dancing around , which would be sound advice. 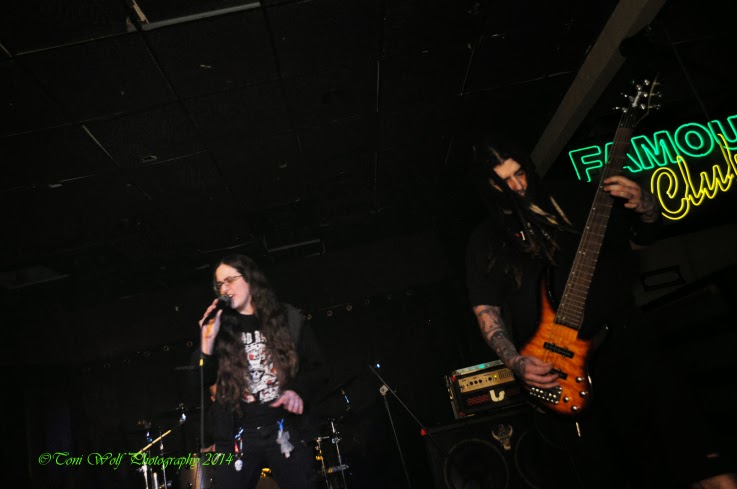 The Bone Church hit me like my last drink and inspired me to throw it back up in the bathroom midway into their set, which I think saved me from getting a DUI on the way back to Sandy Springs. It was good to hear a female singer fronting a metal band that didn't feel the need to be Night Wish or Flyleaf. One of my friends compared them to IWRESTLEDABEARONCE , which is understandable, but the band was more straight forward and thrashy, they had already taken a drunks advice and listened to enough Slayer to keep them them focused on face melting and less into scene dancing. I wish I had been a little more sober to really take them in,  and the sound did not improve by the time they took the stage, despite the warning of squealing feedback that often ran me from the room,  but what I fully ingested I really enjoyed and made me wish my ten dollars had gone to seeing them and Lost Solstice at some where like the Earl or Drunken Unicorn.