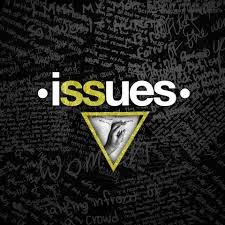 The over at Metal Sucks, seem to be fascinated with Nu Metal, so much so they tend to cry out like Chicken Little that it's making a comeback and claimed this band was going to be leading this. Nu Metal died in lets say 2000, for people who live in urban environments and  are aware of changes in the musical climate, it gave way to emo-core stuff of Myspace so 14 years seems premature for a genre to see a cyclic return, but music is pretty stagnant today so stranger things have happened.

I was unaware these guys were from Atlanta...or the suburbs of which makes more sense, and features members of Woe is Me whose Singer Tyler Carter came out as being bi-sexual so the Johnath Davi like ambiguity is in tact at least . He also has a penchant for covering Katy Perry and Justin Beiber songs, for those Punk goes Pop comps.

From the first song "Sad Ghosts" I don't really feel the Adidas, but this is more of  djent like take on the whole Myspace metal, that happens to have some turntables and pop vocal, if they bust out verse or go with the whole soft to loud Deftones thing, I might have this more claim more credence. I find them less annoying than Linkin Park was. The marriage of One Direction to djent, which if we are going to call a spade a spade is what this really has more in common with then Coal Chamber.

The almost Bruno Mars elements to the opening of "Mad at Myself" is pretty blatant and the ATL urban scheme of the lyrics doesn't ever break into rap, it does remind me Framing Hanley's cover of Lil Wayne's Lollipop. The sometimes sounds like a happier version of Enter Shikari, its not until "Life of A Nine" drop that things get krunk in nu metal direction. But is it anything that Blood on the Dance Floor hasn't already been doing ?

The more djent sound returns , but this time is accompanied by a more Korn like harsher emotive vocal.The clean vocals on this album as cheese filled as they are swoop into to save the songs. The trap music elements that are sprinkled with what sounds like j-pop house music bleeps and blips could work, the late 90's don't really do the House of Pain jump until later in the song. There are moments when this sounds like Alien Ant Farm and they don't have the angst of Slipknot, but this is better than half the of the pop on the radio.

There is a more j-pop dance feel to "Late". This one is less djent and more myspace , mall core and I am sure the catchy neon -t-shirts  they sell, will go over big at Hot Topic these days. It is interesting that pop and hip-hop element have replace the Tool influence that prevailed over most of the more worthwhile.. it it was worthwhile Nu-metal in the late 90's and when Tool transitioned over into A Perfact Circle bands started wanting to have their own power ballads and 30 Seconds to Mars started selling tons of albums before doing drag.

An old skool hip-hop element starts off "Old Dena" which is more of an interlude, I am surprised there is not more dub-step on this album as that seems a more logical band wagon to be jumped on here.  There is a much more Meshuggah like riff at the beginning of "Stringray Affliction".  There is one of the more Bruno Mars like breakdowns in the middle of this which is more convincing than the more djent elements.

I am surprised at this point that I have made it this far through the album, they assume a pop punk beat on " Never Loses Your Flames" that doesn't gel with vocals and the whole song seems more disjointed and filler than some of the tighter hooked writing earlier in the album. "Personality Cult" is just more along the lines of Myspace Mallcore, the riffage at times borders on more Slipknot like phrasing but the masked men from Iowa have a darker element they bring to what they did. This also lack any sort of Pantera influence which weighed heavily on Nu Metal. The closest they come to one of Dimebag's farts is on " the Settlement"

The duet with Nylo on " Tears on the Runway" is an odd choice and the song loses what ever advantage it gains in this creative twist with the breakdowns that at this point have gotten old. When the band closes the album, it has exhausted the brief fun pop elements, and seem to try to be taking themselves more seriously than the songs warrant. I'll give this one a 4 and declare if Nu Metal is making a come back it's the fault of of the same djent that Metal Sucks has kissed the ass of.