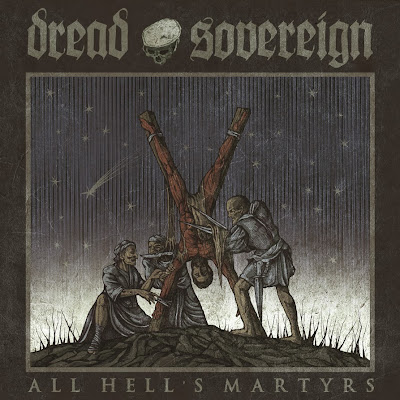 This Irish band ignores the black or post trends of the past decades and goes back to a more meat and potatoes traditional sound in the vein of St. Vitus. Despite having a more experimental intro track the opener could have come out of the 80's with the more modern elements not coming into play until the second song, where Primordial influence comes into play.

The retro sound of the first song didn't really blow me away and I feel it's until "Cthulu Opiate Haze" that the band really warms into their songwriting. The vocals stray from the second string Ozzy-isms and gain a little more rasp to them , yet more tuneful than if they were just growled.

The album moves forward with the times as it progresses. Their is more of a sludge grunge to "Pray to the Devil in Man". The vocals border somewhere between Primordial and Solitude Aeturnus . When the growls do come they are right on time. Things build up into a more sludgecore sense making them appropriate. so I applaud the restrain and sparse use of harsh vocals here rather than just defaulting to them. The lyrics are pretty good on this album as well.

There is a little more in the way of sonics in the rumble of "Iron Scourge" . It has a pretty ripping guitar solo to and for the most part simmers around like some of the more recent Primordial. Some Sabbath like moment come later in the album and the St. Vitus comparison only stick around for the first few songs.

His lower mid-range clean voice is only where he sounds like Wino. By the time we get to "Cathars To Their Doom" the album begins to sound the same to me. It comes to a close with the title track that is the longest at a lumbering 13 minutes. They do hit a darker more sonic almost funeral doom type riff here that has some pretty cool accents. The lyrics talk about skinning Jesus's skin and wearing it in mockery, which pretty much outdoes Glen Benton.

While I doubt despite the uber satanic lyrics this will get much play in the ole iPod, but it's well crafted and goes to some places metal has since forgotten in terms of melody. It does reek of Primordial and I would rather have Primordial album taking up the disk space,  but never the less I will round it for to a 7 for excellence in execution.