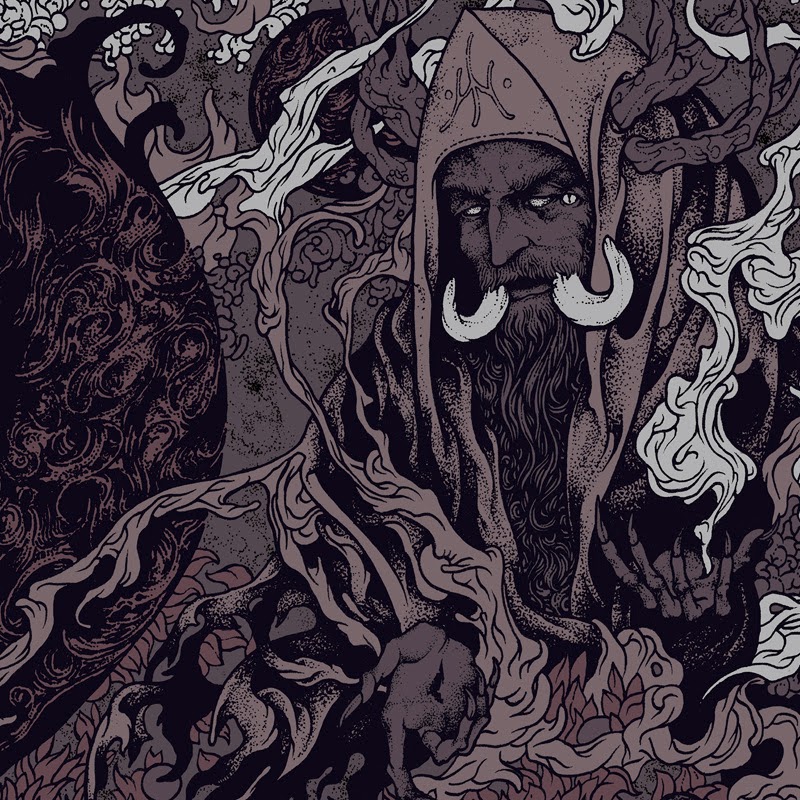 Has the almost whispered phlegm rasp of Enslaved, set against Skeleton Witch, the mix on this album is weird it could use much more bottom end to thicken things up as it currently stands it might be icy , but the layer of frost is on a sunnier day than it needs to me, so I can imagine this will metal halfway through the album. I'll try turning it up and seeing if that helps. O.k it just has to be played very loudly, I am sure it also has to be preformed by twirling your hair in a windmill head bang as well.

It hits the weird middle ground between black metal and death metal, though I would almost say the black side takes over. The tempo stomps ahead like Khors, not reliant on blast beats, these guys are no slouches when it comes to chops , they tend to let them sit back and serve the song, with solos creeping of of the song's s transitions rather than having to steal the spot light, though there is not as much guitar heroics as say on Enslaved more recent work. The emphasis goes to groove more that you might expect, with the fist death metal vocals cropping up in the second song. A less experimental Tribulation might be a good reference point is trying to peg these guys as death metal.

"Riders " might be getting the push as the single , or the track used to promote the album, but it's the most straight forward and boring song on the album, almost to the point of being thrash: The guitar nuances that are sometimes more rock n roll is the only thing that saves it in my book. They really ride into battle on a solid gallop that goes into an odd groove against blast on "Fuelling the Flare". The song winds around a complex almost prog arrangement, but I would not say this is tech anything, as the puzzle pieces all fit rather than comes across as jarring for the sake of being jarring.

There is more Enslaved like elements , and the blast does make more appearances, the more Skeletonwitch like groove add some hooks to this. This more mid-range rasp, gets old after a while and the vocals are really the band's only weak spot, they don't come across as an afterthought as they are punched into the riffage to create the sort of abrasive coating harsh singing is meant to.

The front end of the album is more effective when they kept thing more deliberately paced as the faster paced riffing sounds like it trips them up as they race downhill. The drumming makes some interesting choices on " The Toll of Mourning" and allows the bass to cut loose a little more. The album closes out with  "Caged in the Tunnels of Time", it sounds like the main dilemma this band faces is being told they are death because when they try to replicate these claims it doesn't really stick. They hit it once really good during this time , there is a Morbid Ange moment, but the strength of the band seems top the interplay of guitar melodies that weave around one another.

I'll give this album an 8 as it works well when they lock into this epic sense of guitar melody they have a knack for and they are excellent in the feel of their arrangements, I think the slight identity crisis will be smoothed out over time.