An Autumn For Crippled Children : " the light of September" 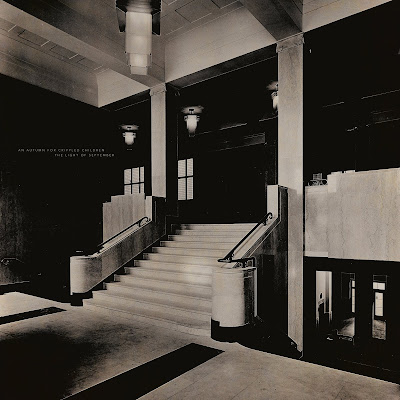 I had to go back an listen to the first song twice to make sure I heard what I heard. I had. It was a band who was once at the forefront of the depressive black metal scene, making bouncy happy music. They have been straying from black metal for some time. However they did it in a way that stayed true to their more down trodden sense of self. This is their 7th album, so change is bound to happen, lets just hope the first song is an isolated incident. They return to that somewhat on the second song , which is much closer than the title track to the band's identity up to this point. There is a little more of a shoe gazing thing to "Hiding in the Dark" , but it is briskly paced. There seems to be more reliance on electronics on this albums than in the past. I like that "lovelorn" has a more somber David Lynch like atmosphere going into it. Its not until two minutes into this drone that the guitar kicks in and goes in the direction we want it to. I would complain that this song is an instrumental if the vocals were not upon to their same bag of tricks on this album. Its a scream that sounds the same every time and has become this projects weak link though sometimes the only element making this metal.

Beginning to pick up on a little more of a formula. Despite the fact "Fragility' is more piano driven at two minutes in the guitars come in a sweep every thing away. I will say it does capture their mood better than the first song that was way off base. The guitar tone is interesting to "the Silence Inside" which builds into something that sounds like it might be from their more classic work, as the dynamic intensities clash well against one another. "A new day has come" remembers what made the old days work, though not recycling ideas."Still Dreaming" just kinda breezes by without leaving me much i can latch on to. It sounds good I just don't feel like it tells much of a story..

"The Golden Years" races along the same smooth pace the previous song hit cruise control with. It is just not as emotive or dynamically driven as what I normally get from these guys. What works on this album is how they are balancing out new sounds while not trying to isolate their audience. I'll give this album an 8 as it does return to the sound I would from them without ripping themselves off like AC\DC. Sure in the process of experimentation not every shot they take hits the mark , but over all it's nothing for them to be ashamed of as they pretty much redeem themselves by the end of the album.