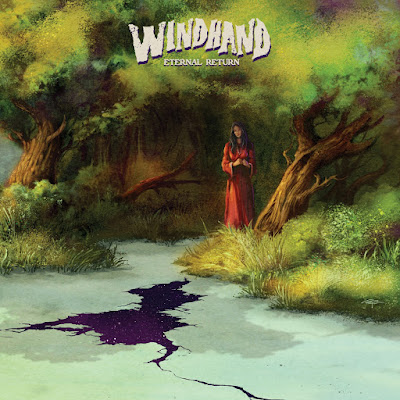 While they are still fixated on Sabbath like overdrive, the vocals have more hooks to them and float over the thick riffs in a way that make the perfect stoner grooves. There is more atmosphere on "Grey Garden" before a guitar solo rips them back into the main riff. This is a good example of how I don't need the wheel reinvented I just need bands to give it their own spin. When we get to the strum of "Pilgrims Rest" there is a hard right turn away from not only doom , but stoner rock as a whole. It's like smoky country with a blues underbelly. They come back harder on "First to Die" . This sounds more impressive when the bass hits you with it's rumble at the beginning, but this impact wanes by the end of the song. Her vocals do pick up some of the slack by the end.

"Red Cloud" has the grooving rumble more common place in stoner  metal. What makes this stoner metal rather than doom you ask ? The tempo factors in , but it never has a dark mourning or evil feel. One question that you can ask at home is does this music make me want to slit my wrists at a graveyard or load up the bong? The bulk of the album is made up of pretty concise songs. There are only two songs that wind out into the double digits one of these being "Eyeshine" . The tempo drops and darkness spreads making the this first song that crosses over into doom. So it's something they dabble in rather than define themselves by. Truth be told they are better at a higher bpm. This song drags

There is a darker plod to "Diablerie" though it's a little faster than the previous song, it still sits closer to stoner metal than doom. The vocals have more of a refined melody.  This is also the single (see below) so it makes sense it would have a more alternative grunge feel like Dinosaur Jr . This grunge tone carries over into a more Nirvana like strum, which while it is wildly different than what I except from these guys makes it still a really good song with a melancholy mood. It reminds me of "Something In The Way". I'll give this album a 9 it might be their most balanced album yet and shows a ton of maturity when it comes to songwriting.