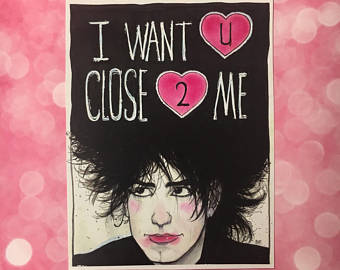 Some one said one morning that I am like the Cure dark on the outside and a marsh-mellow in the inside. I told them then I would make this, so here it is. I was pondering in this thematic series doing David Bowie, because while the Cure is one of my all time favorite bands, David Bowie still edges them out of the top spot and even Robert Smith would admit he would never have done what he did without Bowie. But readers with fine tuned ears or who are just not stoned enough to pay attention the lyrics might notice many of the songs in the Play List series has a common theme...love. Or something in that realm of emotion. This made the choice easier since when David Bowie tackles that subject matter he does so typically in the larger than life theatrical manner he does everything in his world, the exception being the songs on the b-side of  the "Young Americans" album he has a more soulful take.

Robert Smith on the other hand is someone whose perspective fit better. He is bi-polar as hell either in a low swing and writing about wanting to just disappear or he is bouncing round and it's all pastel rain bows swirling around like a lava lamp. This morning I could only listen to the Cure and was trying to get to the lava lamp swirling place , but was in a low swing so these are the songs where the lyrics said..."Oh yeah I feel that way" For better or for worse , music is a major part of my mental health. The Cure helps stabilize me when I am anxious, where metal can make my skin crawl. So here are some songs where Robert Smith meets his marsh-mellow side half way. He muses that sure if my be crazy and insecure, but he is going to embrace his feelings. He is either longing for someone there is a distance between or he is skipping around planning a picnic and smelling flowers he is so head over heels. I can relate. Here I'll shut up and give you music now, not the all time best Cure songs he has a ever written , but a great soundtrack for when I'm fluttery.