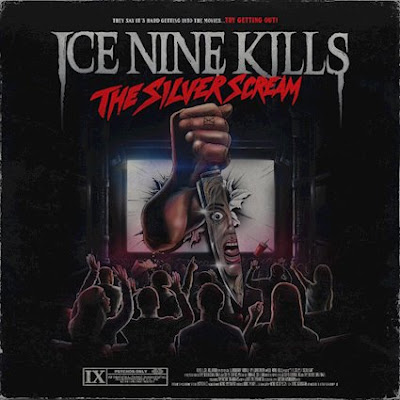 I am going into this album with next to no experience with this band, and had a funny feeling about it knowing they are metal core, which is a sub-genre that really doesn't get much coverage here for good reason. It generally sucks because it sounds like mall metal. The chorus to the first song reminds me of Avenged Sevenfold. Obviously it is the darker and more melodic touches that are what I am listening for. The main reason I checked this album out to begin with is because it has a horror movie theme. "Thank God It's Friday " which is an homage to the "Friday the 13th " movies , is decent until we get to the cheese of the overblown chorus that tries to hard to be epic. I think "Stabbing in the Dark" is referring to "Halloween". It starts off almost like a power ballad before accelerating. "Savages" is kind of boring and vague in the movie it's paying tribute to. "the Jig is Up" is seems like it's about the Saw series. It's not remarkably original , but finds these guys doing what they do well enough. The chorus is less over top so that is worth something to me.

"Grave Mistake" is about as bland as it gets. "Rocking the Boat" might be about Jaws. It's pretty much color by numbers. While it is not wearing as badly on me as I feared it might, they are not coming up with anything to change your thoughts on metal core. "Enjoy Your Slay" is about the Shining, which get some points in my book since it's one of my favorite movies. They continue to play off more emo like vocal styling set against hyper thrashing with growls tossed in at random to induce break downs, but isn't this how most metal core could be described, so they don't really set themselves apart aside from the lyrical focus. "Freak Flag" is more vague in the lyrical focus , which is the most interesting part of this album. It is also one of the album's most accessible songs. "the World in my Hands" is another lyrically vague song, that is one of the more radio takes on Myspace Metal.

"Merry Axemas" is one of the more well handled songs. It is a nod to "Silent Night Deadly Night".. "Love Bites" is a cool take on "American Werewolf in London"it's my favorite song on the album, but it also reminds me of my girl friend so I am sure that colors my perspective. "Is it the End" takes It and makes it sound like something from a musical, until the screaming and double bass races into things. I'm guessing the guys from Less Than Jake are the ones handling the horns here. I'll give this album a 7. It's not bad. It's well done. Some of the lyrics are handled better than others. The emo choruses and sections that get big and wanky are not my thing. It might be yours.