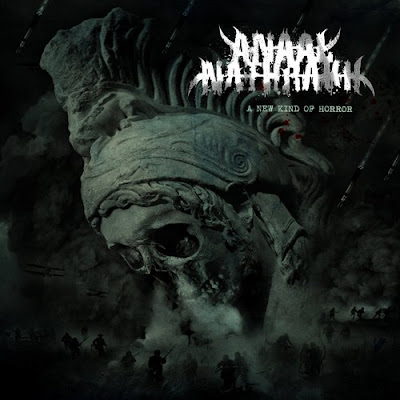 There are no real surprises going into this as these guys continue to go for the throat when they do use sung vocals instead of screaming it has a more Emperor feel. They blast in a very winding fashion with plenty of double bass to go around. So it sometimes falls between black metal and grind core. Dark and oppressive, they continue to drill into you but this time with more of an industrial feel, which I prefer over the first song. There are some shrill falsetto vocals , that sound like King Diamond hyped up on meth. This album feels more like an industrial album from a production stand point. There are many metal elements like the yodeling that are in your face.

Regular readers who know my tastes by now will be able to see where I would prefer the more crushing industrial side of "Forward", even though it means compromising the black metal side. This is closer to Behemoth territory in it's big militant groove. More of King Diamond like falsetto crops up on the more Emperor like "New Bethlehem". There are more blast beats with syncopated grooves book ending them.Melodic guitar melodies fight against the blast of black metal nastiness of "the Apocalypse is About You". This song sounds conflicted about what it wants to do, though that is sort of this band's thing.  "Vi Coactus" finds them settling into a sound I more commonly expect from these guys, the chaos becoming more refined . "Mother of Satan" is almost humorous when they bust into the section where they just snarl "satan, satan, satan...' over and over. This is not to say that I dont like it.

I listened to "the Horrid Strife" as few times and it sounded like the other songs so much that it never left more of an impression after multiple listens. The last song "Are We Fit For Glory Yet" has a background that sounds like "Carmina Burana". It falls closer into the Dimmu Borgir like symphonic  metal realm, but is well done and rough around the edges . I'll round this album down to an 8. It's well done, but the songs don't always hook you in. If you are a fan you will no be disappointed.