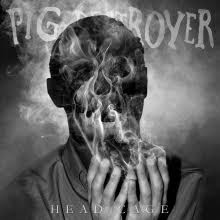 The album starts off more grind core than not, these guys go for the throat with the anger of hard core coupled with the more metallic leanings of death metal. The vocals are more in line with hard core. Feed back squeals out from the edges of the songs. There is more groove to "Army of Cops". It proves these guys can actually write a song when they put their heads to it. There is a little more of a thrashing feel to "Circle River" . The vocals take on a more punk howling. By the time it gets to the amped up tempo of "the Torture Fields" it is clear their drummer is really talented, but everything else is descending into a mire of chugging and beginning to all sounds the same. We do have that rule, cool riffs alone do not a good song make.

Their grind core tendencies are more fully indulged on "Terminal Itch". It's a little straight forward for me. The riff to "Concrete Beast" is not wildly different from many of the other metal tinged riffs on the album. The vocals are a higher choked scream. The songs begin to sound the same on "the Adventures of Jason and JR". The verse riff is really mean. The vocals keep falling along the same lines of screams with just a few minor differences tonally. Their need for speed begins to wear thinner on songs like "Mt. Skull". Some of it comes across a little busy. The bass player they have recently added makes himself known going into "The Last Song" which hits a chug much like something Converge would have fucked with. I like the extra layers of sound they add to things .

They close the album with "House of Snakes". At seven minutes long it's the longest song on the album. From the beginning it reminds me of "Orion" before dropping down to the thump of the bass against a sample. At a minute and a half in you can't imagine anyone thinking this isn't heavy as fuck. The guitars wind around in varied levels of harmonized chugging. These guys are good at what they do. That is why I am rounding this up to a 7.5, they are not re-inventing the wheel here.  So fans is this worth a six year wait ?