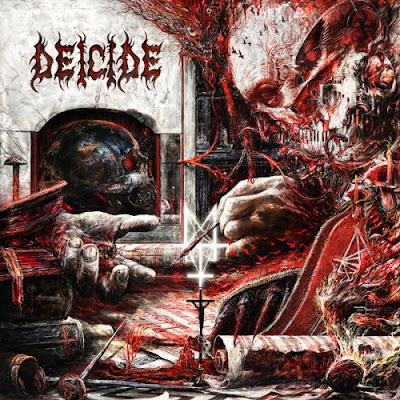 The band's 12th album, finds guitarist Mark English from Monstrosity on board. His solos have a less chaotic feel and bring a more classic metal feel to the table. Benton has stayed true to what the band does, so much so that I have felt like I didn't need anything past "Once Upon the Cross", but I am giving this a shot as I have heard some stuff in-between that was pretty decent. The first three albums hit you with a steam roller intensity where they are chugging at you like a machine. That might not be the case here, but they are very efficient.There is more melody in the riffs as they are not giving you 39 lashes with them. Any problem I could have here is a problem I would have with death metal as a whole, it can be one dimensional aggression. This causes many of the songs to sound the same when they get more entrenched in speed.

The bass seems to be lower in the mix and Benton is not double tracking his vocals with the higher more demonic one which I think helped define their sound. This caused songs like "Crawled From the Shadows" to sound more like everything that has come after them. When the songs take on more of a thrashing feel, they grab me a little more with the relentlessness of "Seal the Tomb Below". The punchy vocals give it more of a hooky feel. "All That is Evil" doesn't capture this as well, though the syncopated march driving it does keep it from sounding like everything else. There is a Slayer feel to "Excommunicated". End the end the song blurs into the others. There is more intricate guitar work going into "Anointed in Blood" than I can really recall hearing from the band before. While its chug will give fans of death metal , what they want, someone like me who goes into with the mind set all metal is equal and want to hear song writing, gets a little boring.

The punch of  "Crucified Soul Salvation"  recalls more of their earlier days than anything thus far. The vocals have more purpose and are not just grunts as an after thought , but a working part of the song.  "Defying the Sacred" highlights the new more melodic side of the band, that would appeal more to fans of post At The Gates death metal. Then they revert back to a more meat and potatoes style of death metal. There is a angrier attack to "Flesh , Power , Dominion", that I think is done more effectively with the more accented "Destined to Blasphemy" If there was ever a debate over who is the best death metal band Deicide or Morbid Angel? This album doesn't touch Morbid Angel's last one in terms of blending musicality with brutality. I'll give this an 8 as it gets the job done, but doesn't touch the first three albums.