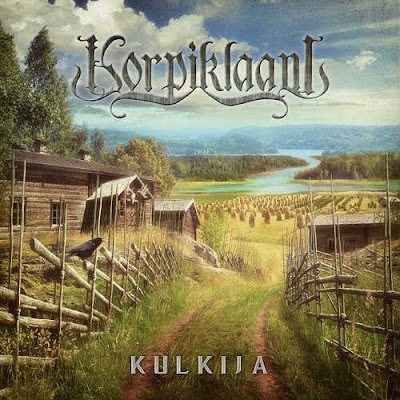 I must be a glutton for punishment. I go into this album knowing it's going to be too happy for me, but give it a shot anyway. Surprise, when we say folk metal here it is more like polka than metal. It's not til the third song that they find some darker minor key notes and slow down some.The mix is a little as the guitars could stand to have more heft. When they build into a more epic chorus it's not totally cheesed out, so I can still deal with it and this might be one of the first songs I have liked from these guys. A more longing tone opens "Harmaja" , but if there is one thing I have learned from these guys, it's don't get too comfortable as they could kick into that stupid polka thing at any moment. This one has a more subdued ballad like feel which seems a little soon 4 songs in. But at least they are showing more restraint.

They continue to show more of a grasp of what folk means than an all out frolic. The metallic qualities are pretty basic palm muted chugging and the recycle most of their folk melodies, but it is working better on this album than some of the drunken jigs I have heard them embark on in the past. The bass has a little more of a presence than what I recall in the past from them. About six songs in things all begin to sound the same. The vocal delivery is somewhat to blame as the melodies all follow the same bouncy staccato cadence, until the chorus where they are more sung. Sometimes there is a little more of a gallop where and there. They slowly begin to add more punch in to the metal sections . "Kallon malja" finds them grinding down into heavier amid the sway of pirate shanties which works really well for them.

They continue down are heavier path than I have heard from them with darker tinges.But for every song there is something that sounds like polka from the middle ages . "Riemu" is back to being almost too happy, though the bounce back to keep a better balance on "Kuin korpi nukkuva"though even then some of the folk elements are to bouncy and ska like .The guitar on "Juomamaa" sounds like something from a pop punk album and like the emphasis on on all the violins and hurdy gurdys. There is a more somber tone going into" Tuttu on tie". By the time the vocals come in I am having to reconcile myself to the fact that even though they came closer this time out these guys might not be my thing. I'll round this one down to a 7.5 .