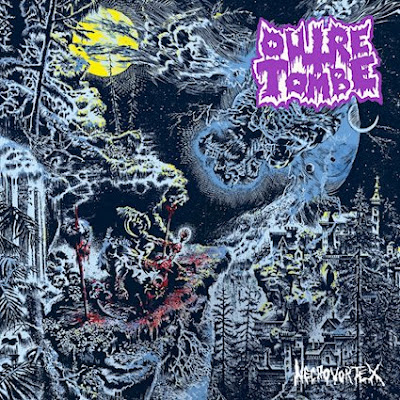 When it busts into the chug on the first song I am thinking "Damn Get it guys ". It does has a little bit of an early Entombed feel, but it takes me back to the classic late 80s death metal sound, I loved in high school. There is plenty of groove and some Slayer influence for good measure.Then they go more for speed on the second song and it compromises some of the magic the opener tapped into . The vocals begin to have more of an Obituary feel to their grunts. "Aberration" as a whole is an even faster and more driven song than the one before it. In doing this they sacrifice some of their personality. I get it this is a death metal album so I should not be surprised that it's going to be fast. There are moments of groove buried on "Concile Cadaverique". When they vary the tempos it works the best and gives you more to head bang to.

Things feels angrier and more violent from there. I can hear more thrash influence creep in. The guitars drone into the tremolo picking a little more, not making in blackened , but a throbbing blur.I know death metal should be fast. Some times it comes across like I will complain about anything. These guys nail it on the gallop of the title track. There are catchy riffs that make you want to return to the song. The lyrics seem like they might be sung in French half the time. There is little in the way of atmosphere, these guys work off sheer velocity and meanness. This does cause some of the songs to begin to take on a more uniform sound by the time you get to the album's 3rd act.

They pick from some of the best influences Entombed, Obituary, Sepultura and make them their own. The drummer for this kind of thing has to be a machine, but he really doesn't kill you with the double bass and is pretty tasteful for death metal. I'll round this up to an 8, though when I am in the mood for this sort of thing I am much more likely to go back and dig out my old Obituary albums, For kids who don't know any better and looking for new death metal this is worth your time.