Marisa Nadler : " For My Crimes" 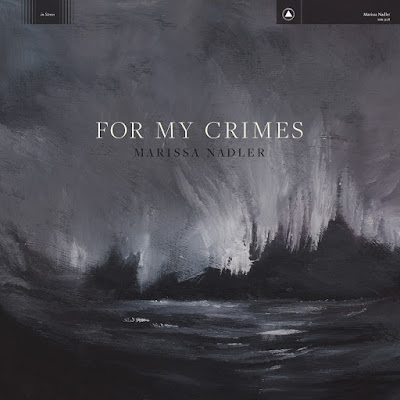 She continues down a path of hauntingly morose balladry. More ghostly than Lana Del Ray. More folk than country this time around, though hints of western sounds still color this album. In fact there is more country on "I Can't Listen to Gene Clark Anymore" that the more ambient opening track. Things seem simpler here. More minimal compositions, keep the focus on the vocals. Sometimes these vocals are layered on the chorus , notably on " Are You Really Going to Move to the South". There is a modest return to country in the relaxed strum of " Lover Release Me". She sings smoothly without a trace of twang, yet there is something in her delivery that feels like old country.  She lets her voice crack rather than go into a head voice in certain places, giving it a rawer feel.

She doesn't try to take a stab at rock on "Blue Vapor", but has a more commanding deliberation. This is the strongest song thus far. Things get marginally darker on "Interlocking". Overall I would say this album feels more nocturnal than dark. Dreamy and somber are her subdued melodies. "All Out of Catastrophes" finds her with more of a lower pitches huskiness to her voice, while managing to still capturing her trademark feel. Lyrically this might be the most interesting song thus far. "Dream Dream Big in the Sky" feels like 50s pop. There are some great song titles on this album, "You're Only Harmless When You Sleep" is one of them. This is a more delicate folk song. It builds faintly with some strings in the background.

"Flamethrower" is another lazy strum that rings out into a sad empty place. The melodies float around rather than pulling you into it. There is some interesting atmosphere in the background. The bulk of this album is certainly more stripped down than "Strangers". Strings join in on " Said Goodbye To That Car".  I think this album is going to have to grow on me. Production wise it feels more intimate. Songs like "Interlocking" I like more each time I hear them so I am going to go ahead an give this album a 9, as it's so ethereal and wispy the songs become intangible and don't hook me as quickly as some of her previous efforts. Comes out Sept 28th on Sacred Bones.