Warrior Soul : "Back On the Lash" 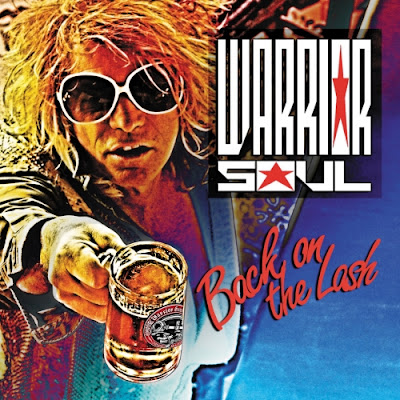 When I was in high school I went to go see Soundgarden direct support for Danzig. While Soundgarden who was touring for "Louder than Love" was awesome the band before them was Warrior Soul. They seemed to be a bridge from glam metal into something more cerebral. I went out and bought "Last Decade Dead Century" the next day. So I want Warrior Soul to sound just as incredible as they did then. We go way back. I am aware Kory Clarke has drug the name around from various incarnations of this band and none of the members that played on the classic first three album still remain. But at the very least I expect them to be within the same sonic range as they were in 1990. Granted they were ahead of their time. They even played with the former Killing Joke drummer at first so when this album opens with the same style of punk infused metal as Killing Joke, this makes sense. Kory's vocals are more aggressive here not unlike something Jaz Coleman would do.

It's when they begin to sound more like Faster Pussycat on "I Get Fucked Up" that I begin to question the direction they are now in. Though is this more passable than what happens on the song that follows. It's the title track that dashes my hopes as Kory's voice sounds fucking awful. I am not sure what kind of fucking producer let that fly. His sounds like god damn Lemmy jamming with the Cult. It sounds like he was losing his voice in the recording booth. "Thrill Seeker " is marginally better with a little more balls to the guitar. The riff to "Goin Broke Getting High" is heavier and makes more of an attempt to rekindle their former glory. The rust on Kory's raspy pipes, flakes off a little, but this is far from "Drugs God and the New Republic". The riffs continue to fall somewhere between AC/DC and the Cult on "Black Out". The vocals are more spoken here. The bass really drives this one.

The very straight forward manner they constructed these songs, feel like there is little trace of the acid fueled sense of space age surreal sonics that colored there older work, with the chorus of "I 've Got the Rock" sounding like a Motorhead b-side. The lyrics are even less inspired so Kory has to take some of the blame for this. When he tries to go up into his higher register it's almost painful though the makes a more successful attempt on "Further Decay". "That's How We Roll" sounds more like the type of rock these guys were becoming an alternative to back in the day. It pains me to have to give this album a 6.5, but even then I feel I am being generous.It id inspire me to go back and revisit all the old albums to hear when this band ruled.