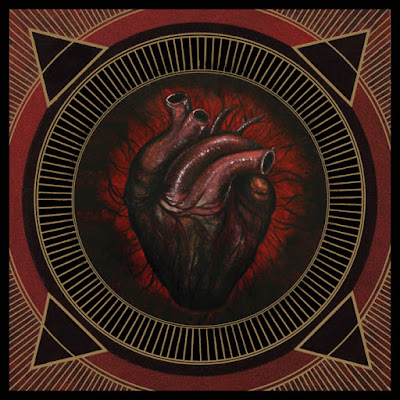 This one went under my radar , it's a band from Iceland that released this back in March. While they are a black metal band I am drawn in by the fact that they lay off the blast beats until five and a half minutes into the eleven minute opener. Instead they opt for a darker creeping brand of deathly doom. They have dissonant guitar melodies layered over the blasting when it does burst in. The vocals are more of a an agonized croak that is in a lower death metal range. They slow back down into the dissonant abyss they churn out. Normally I don't like long songs , but this some how works for me. If they had blast beat their brains out for 11 minutes then that would not have flown as much.

They do come straight at you with blast beats on "the First Born Of the Dead". Around the two minute mark this slows for another return back into the darkness. More deliberate spoken vocal and sung vocals are layered in a call and response before the guitar solo comes in. At the six and half minute mark the song breaks down into an even more gloomy riff. "Alignment Divine" finds them falling more neatly into what is expected of modern black metal. They continue with the blasting on "Carrion is a Golden Throne". This song features what by the midway point is the album's most melodic moment a break down where the vocals take on more of a whisper.

There is another storm of blasting going into "Magna, Mater, Menses" . Following the formula that seems to be developing they ebb back down into the misty mountain hop of gloom and then kick up a few blasts here and there.It's clear if they shaved off some of the atmosphere at the end of these songs they could condense a few minutes and make things more concise. They close the album with "the Dead Age of Hollow Vessels" which sounds like it should be about millennials based of the title alone, but the lyrics are obscured in the growl. The drop the raging earlier in this song than the others, which is strange considering this is the album's longest song. At this point the atmospheric excursion into melodic dusk is now expected, but sonically still interesting.I'll give it an 8.5, unlikely to make my top 10 black metal albums of the year list, but if you like dark and melodic black metal working off a cloud of dissonance then this is worth your time. Iceland has a pretty decent track record when it comes to black metal and these guys are a worthy addition.