Deathcult : " Cult of the Goat" 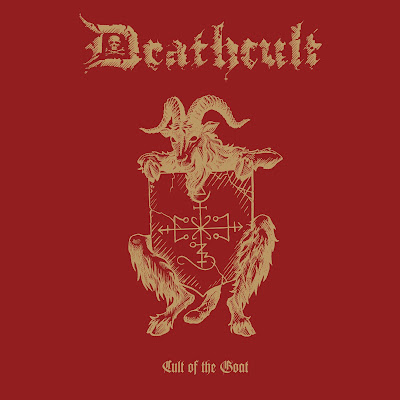 I reviewed the first album from this band features members of Taake and Gorgoroth and now they are back for more. Hoest is playing bass instead all the instruments. It has more of a raw punk rock like recklessness to it.Midway into the first song sung vocals are layered under the mid-range that normally dominates these songs. Their is more attention to the songs that I remember the first album having. It's hard to say if these guys sound like what you expect when someone says Norwegian  black metal as now that covers a much wider scope than it once did. They have more in common with Taake than they do Gorgoroth. They play with the formula and are not as mean spirited as Gorgoroth in the manner they attack the songs.In fact they hold off on the blast beats until the last minute of the song. There is a slight wink to Mercyful Fate in how the riff to "Bloodstained Ritual". Though it holds the velocity of Bathory's more punk rock side. As far as black metal goes these are not long songs, but in terms of what this band is doing there are moments where they could have been more efficient. The chant of "Hail Satan" on this one is pretty catchy. They do blast off again when launching into the chaotic guitar solo. The vocals drop into a lower death metal growl when coming out of this section.

"Ascension Rite" finds the band taking a more straightforward path into what you typically think of as black metal. They play this effectively , but I don't hear as much of identity when going this route. They do get out of the blasting and go with a more doom tinged classic metal riff. The layer of lower sung vocals haunts the bridge like breakdown going back into the song. "Man Vs Beast" kind of picks up where the previous song left off with a descending riff. They do slow down into more of a groove."The Oath" has a big majestic sound, with a more late 80's taste of metal to it, though able to thunder along the lines of Watain when the double bass kicks in. Some of the additional backing vocals are by Attila of Mayhem. Midway into the song it takes on more of a rock n roll feel.

"Devilgoat" has to have more of an evil pulse to it. How can you have a song called that and it not sound evil? There is a cool bridge in the verse that gets more melodic and things like sitars come in to get your goat. Women screaming in ecstasy is always something welcomed in black metal.  If any genre of metal needs to be more sexualized it's black metal. When the blast beats come in sung vocals are layered behind the screamed vocals. The last song is more of a outro than a real song. Overall this album way way better than expected, obviously the have a high caliber of Norway's finest on board, so you can't expect this to suck. I'll round this up to a 9.