Desert Graves :"Nobody Gets Out Alive" 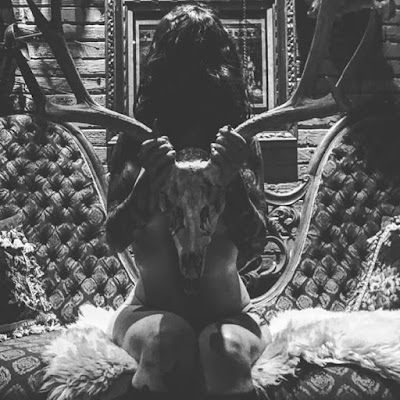 On one of my Bandcamp searches for death-rock I came across this band out of Idaho. They are not death rock, but an angular blend of noise rock and post-hardcore. There is more of a creepy punk vibe to "Demons". But the emphasis seems to be the angular twisting of the riff against the angry shouts of the vocals. Everything is lo-fi and bombastically blown out. They reign things in slightly for "Sleazy D" also includes more of a call and response between the male vocals and the snotty female vocals that chime in. There is a more melodic section heading toward the end of the song, as it escalates into a more psychedelic journey.

They ease into a darker more sublime dream of a melody on "Echo". The female vocals lead the way in and the angry male vocals take over when they used the expand and contract dynamic of loud to soft on what would be the chorus. So far this is my favorite song, because it is the darkest thus far. The girl has a pretty sexy sounding voice, I'll have to stalk their Facebook and see if the sound of it measures up.  "Waves" is more of a shoe-gazing affair. As an instrumental it is pleasing, but I think they would have been better served by having included an actual song as it seems like more of a passing outro.

The album is a name your price deal on their Bandcamp. I think this album's strongest songs balance out the more noisy songs, which sometimes work better than others. At the end of the day I thing this band is successful at what they wanted to do, unless that was to make a death-rock album, which it is not. But for psyche-garage rock with an angular post-hard core edge to it. In someways it reminds me of if Murder City Devils had a bizarre drug orgy with A Place to Bury Strangers and Sonic Youth. I'll give the album a 9 as I am strongly considering downloading it.