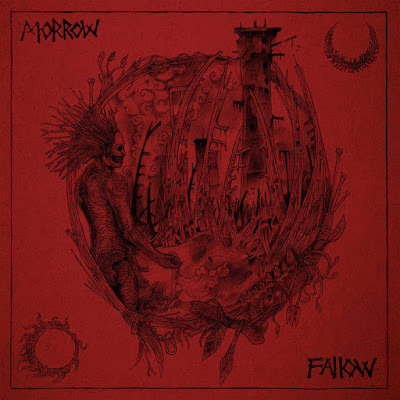 I like this while neo-crust thing as it is dark and sonic. The key to it is a careful balance of varied dynamics. First you have to take what Amebix did and do it better. Easy enough. However if you get to heavy with it you might end up sounded too much like Neurosis and turn into a sludge band . When this British band opens their album they do it in a big way with a sprawling 12 minute song.  The first song sounds like I am listening to three songs jammed into what is being called one song here. These songs all have cool parts , but I am trying to see how they connect. The second song is much more infused with punk and hits more like hardcore, the darker folkish sonics creep in more at the end of the song , but it is pretty much straight up in your face. They continue down this faster and furious path on "the Hunt" which follows and it is less effective since you have already heard them go there.

"A City Of Gristle" finds them wise to slow down and give the song room for the more powerful sonic to be summoned rather than rush through the song in a temper tantrum. The vocals stay in the more hard core throaty bark. This builds into a very effective dynamic. The more neo-folk is flirted with though not as heavily as some reviews of this album lead me to believe though I think the previous song which might not delve into this as deeply still does a better job in the over all balance of this feeling. It does default back into the more hard-core side of the band when the pace picks up, but as far as twelve minute songs go this one does a better job of holding it all together than the opening track.

I think these guys have a ton of potential and really like the more sonically intense dynamics some of these songs lead to. I think there are a few places where the song writing could be a little more refined in the transitions , but over all this is pretty solid and worth a listen if you are into this sort of thing. I like the darker sonic parts more than the hard core sections, but even those did have their moments. Don't go into this expecting the more dark folk side to be the driving force its the punk. I'll give it an 8.  Halo of Flies is putting this LP out in the spring though you can still check it out on their Bandcamp below.