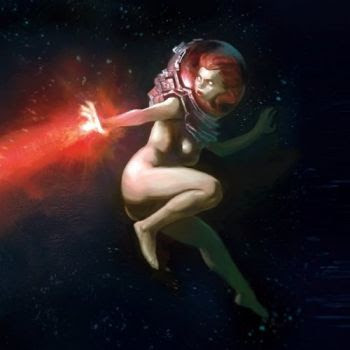 Going into this all I knew was two of the members are in Monster Magnet. I  loved Monster Magnet's first three albums. These guys might be stoner rock , but that is where the comparisons end. They race off into a cloud of bong smoke. It was when I got to "Alaskan Thunderfuck" that it hit me 'Damn, these songs are fast for stoner rock, these guys must be doing more cocaine than they are smoking pot". The songs are all very brief, so think more in terms of punk rock when it comes to something "Shocker". The vocal are really well produced. The lyrics are amusing. Even though it's pretty uptempo when they slow down a few bpms on"Crazy" the song excels as it feels less rushed.

There are some interesting guitar tone. Normally its very compressed and not a fuzzy as you normally associate with this kind of thing. On the instrumental "Fried , Dyed and Laying to the Side" you can tell that these guys would be fun live. The first song that I really hear a touch of metal is "Shell of  a Man". The thing that keeps this from being metal more often than not is how it's fun, but it's not dark, in fact it's very bright sometimes reminding me of the Foo-fighters. I like these guys better than the Foo-fighters because they are devoid of the radio cheesiness. In my book everything after the Foo-fighters second album sucks. I will say their formula gets a little stale by the time we get to "Houndstooth" as this sounds like all the other songs.

I like the title "Tits and Bones". The song itself runs at a hyper shuffle. The vocals are very deliberate. The way the vocals fall remind me more of Queens of the Stoneage. "Humble Brag" kinda raced by it blurred in with the other songs.  The vocals to "Super Highway" have a little more to hook you in and the guitar more punch so these two factors work for me. "Liv A little" has a Gary Glitter kind of stomp to it's 70s rock aspirations until it gets into it's boogie. This is the first time I notice the bass player. I'll give this album a 8.5 and see how it grows on me. Some of the racing paces to these songs make them blur a little , but I like the kind of smart ass cocky vibe of the lyrics as this is a ton of fun.