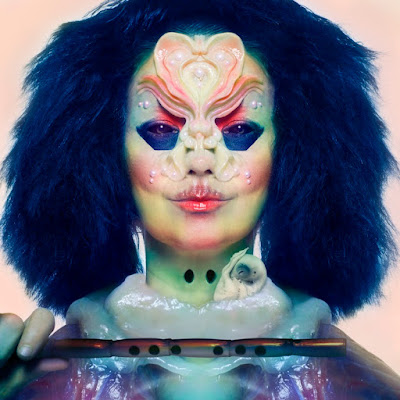 Bjork has made an album of lullabies for Snow Fairies. "Vespertine" used to be one of my favorite albums to take naps to and this one picks up where she left of with that album. Surreal coos and whispers color her multi-tracked vocals. The production is amazing. Everything sounds great , but it is the fluff of cotton candy floating by your ears.It soothes them with it's sugar.  Very heavy with synthetic flute sounds you might imagine a dancing fountain with colored water shooting up with the notes of "Paradisa" which is just an interlude. "Claimstaker" is a slight shade darker. Her light vocals which sound as if  age has not touched them. At 52 her voice retains it's perpetual pixie like quality.

I like the lyrics to "Tabla Rasa" where she is a mother telling her children "I hope to give you least amount of luggage". It's a ballad but also a feminist anthem. Something I would normally roll my eyes at ,but her it is done with such dreamy smoothness I can't hate on it.  There is a glitchy quirk to "Sue Me". It is almost like she wants to prove she can sing over any beat no matter how bizarre it might be. Lyrically it returns to the sins of the father seem, though here, it doesn't work as well. I don't get a sense of loss from "Loss". I hear that it's the subject matter in the lyrics that come through, but that is not make the sonics of this convey. The song begins to drag a little in the last two minutes. "Courtship" is yet another flute driven song. The vocals meander around a shifting beat , but never invite you in.

According to "Features Creatures" it doesn't take much for Bjork to be five minutes away from falling in love. Things like accents and beards are said to induce this.The ethereal float of atmosphere helps keep "Body Memory" wandering in a pulse even when the minimal patter of the beat comes in. Of course the title track has to keep the flutes alive. It floats by with less meat on it than the rest of the album so far.  Once I get to "the Gate' the album begins to blur into flutes and overdubbed layers of choral like vocals. The "care for you... refrain draws you in more than some of the other ramblings on this album. "Blissing Me" also holds my attention more than many of the songs which fade into the background with the twinkle of their harps. Her vocals have more prescence on the last song, but it is not as focused as the previous song. I'll give this album an 8.5, I think it's ambiance could grow on me and inspire naps to come , but don't think it's as good as "Vespertine".