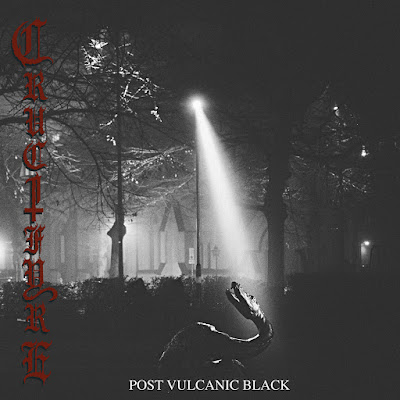 From the first song this Swedish band makes it clear that they rule and you will bang your fucking head. Between this and the new Pestilence it seems like 2018 is going to be a good year for me. Granted the Watain is still growing on me. Where these won me over the the fact they are not trying to bull doze me over with blast beats. There is melody and hooks, not just thrown in , but they seem to be the essence of their sound. Going into this I assumed that they were going to be another Entombed rip off. There is a few shades of influence if we are talking about "Wolverine Blues: era , but there is a blend of Slayer like thrash with a more Sabbath like sound. They do pick up the pace on "Thrashing With Violence" which goes into the more punk side of early Slayer. Running more off feral energy than the first song, which works for what it is but I would not want an entire album of this as a little goes a long way. The vocals are not really sung, but more deliberate in a gruff Motorhead manner on "Mother Superior's Eyes".It more mid tempo with the dynamics dropping down into a more doom like dirge in places.

"War Chylde" finds them falling into a more Venom like place. "Hyper-realist" finds them continuing to bridge the gap between doom and thrash with great vigor. "200 Divisions" finds them getting closer to the Entombed place , before the chorus busts into power metal like clean vocals. Th.e tight Slayer like chugging continues to kill it. The song that follows finds the band returning to the more punk tinged side of thrash, with shouted vocals. They take this a step further on "Murder and Sex and Self-destruction". I think their take on thrash is more effective when they do it a way that incorporates a more classice metal feel like they do on "Copenhagen in the 70's " which has touches of Mercyful Fate to it.

The last song opens with piano. It evolves into a more My Dying Bride like place. It never accelerates into the more neck breaking thrash found earlier in the album, but I think that is a sign of good taste. I'll give this album a 9, aside from some of the more punk touched places which are not really my number one thing, I think this albums gives me most of what I want from metal. Oddly the only black metal on here is black metal in the vein of Venom or Mercyful Fate and not what kids today think of as black metal, but it still works well.
Posted by Wilcifer at 11:19 AM