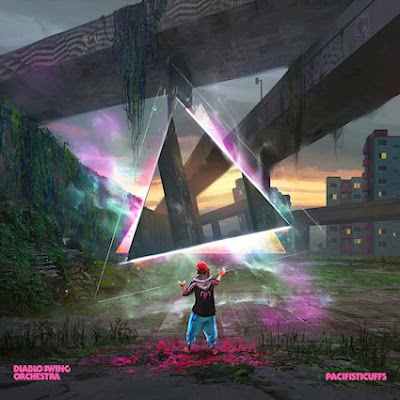 Not the first time I have heard this band but it's the first time I have reviewed them or actually sat down and listened to one of their albums all the way through. So far my only real issue with them is they are a too happy. The horns contribute to this. They are not ska, more like big band rockabilly with metallic guitars. I would not call them a metal band though.The get a little closer to ska with the skip in the step of "the Age of Vulture Culture". I like it better when the girl sings, she has a slightly darker sultry edge to her voice. They shift styles mid song, with more of a blended quality than say Mr. Bungle, as the jump from ska to bossa nova is not wide. By the end of the song they give me something to nod my head to.

They even used a slightly growled vocal on the more western infused gallop of  "Superhero Jagganath". I can imagine these guys are fun live. The vocals are much better when they are in more of an Elvis croon. Not as much of a fan of the multi layered choral vocals. Sometimes the songs are more focused than others, they seem to work best when locked into some brand of a groove, but that could be said of almost any band. Occasionally there are some almost Nightwish moments, though with out the pirate outfits. "Jigsaw Hustle" goes in a disco direction, and we know how I feel about disco Kiss so this one is a hit with me. My favorite song on here so far.

"Ode to the Innocent" is a torch song ballad, that shows off the female singers voice, which goes for a more Kate Bush like quirk on "Interruption" that follows. When the vocal melody rises above and beyond it causes the rest of the song to follow. The are back to a more jazz infused frolic on "Karma Bonfire". The vocals have more of a swing to them not unlike a more dynamic version of say Cherry Poppin Daddies. There is more of soulful blues feeling that borders on gospel when we get to "Climbing the Eye Wall". I'll round this one up to an 8.5. Its a fun album with dynamic vocals that has a little too much of a skip in it's step for me at times. But they really should play Dragon-con .