Summoning : "With Doom We Come" 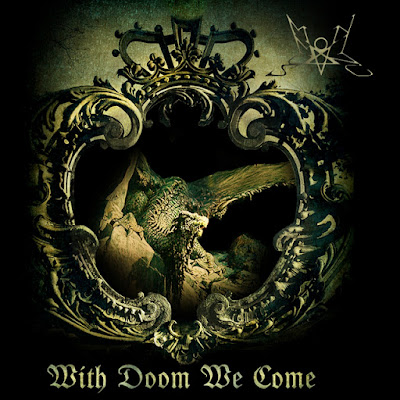 It starts off with a instrumental that has what sounds to be snippets of dialogue, almost like background music for your next Dungeons and Dragons session, the actual metal doesn't start until the second song. Which has growled vocals , but while the main riff is more interesting.There are some folk percussive elements that are more predominant at the begin. The mix of this album is weird sometimes unfortunately the synths are more present in the mix and the guitar takes a back seat compromising the heaviness that could have been if they have a more organic sound.Not that anything is really consistent as the guitar comes up for "Carcharoth". The songs tend to work at more of a pulse than the triumphant gallop that once characterized this band. I can only think of one song that isn't ruled by the pulse of it's melancholy atmosphere. The positive side to this is the fact that the melancholy feel makes for a darker listen when then the fugal horns are not holding the melody. On "Carcharoth" the vocals have more of a Bathory quality to them and are not in the Gullom like growl.

The piano that opens "Herumor" highlights one of the tonal weakness of the album though this particular song compensates for it by switching up the approach to the vocals and having a almost Dead Can Dance like rhythmic quality to the songs tempo breaking away from the pulsing drone that has ruled the album up to this point.Things get a little darker on "Night Fell Behind". The drums start off sounding a little more organic. This one is back to the pulsing feel , but it does so in the same manner as post-prison Burzum. The vocals go back into the almost sung Bathory like feel.  The last two songs of this album both are eleven minutes. "Mirklands" opens with a piano melody.  The vocals have more of a feral snarl to them. The dynamics of this song are more effective despite having to wrestle against the keyboards.

The title track which closes the album finds the vocals getting even closer to singing. It is pretty clear that while the album really indulges in the more folk like elements to create a more pagan metal feel these guys are not playing black metal. The flute melody really drives this point back home to Middle Earth. The break downs where it falls back to the synth lines are not the album's strongest moments.I like this album despite the cheese filled synth lines. I like the fact it is darker and more melodic. I have enjoyed the handful of listens I have given it thus far, though unless we get a thick snow, I can not see this as something I would listen to while out and about on my iPod, so I'll round it down to a 8.5, which is still a step above just being pretty decent.