Descend into Despair: "The Bearer of All Storms" 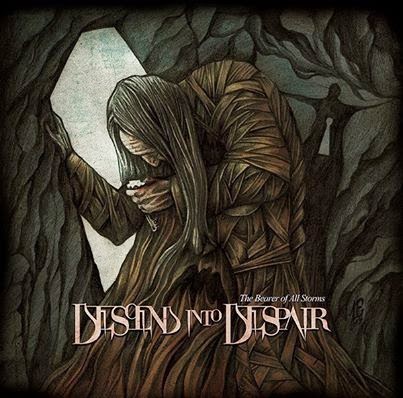 Starving for some new funeral doom, I jumped at this Romanian band, since after all they hail from Dracula's home land so they have to be good. They carry the plod into their first full length with exotic synth lines draped over the background, the syncopated part in the chorus of " Portrait of Rust" is pretty clever, but they sound like uber slow death metal more often than not.

Some of the guitar tone could stand to be thicker, or cleaner if they were going for more of a Loss thing. I can hear some Evoken influence. Midway in the first song clashing melodies snake around one another, the guitar line reminds me a little of Alice Cooper. The vocals are a low cookie monster growl, the bass player hides out in the back ground , which might effect why their sound is not as fulls it could be and gives the drums a weird hollow sound.

The keyboard add a lot to their sound, making this one of the rare exceptions to the rule when it comes to this sort of thing. The eeire almost circus like cadence of " Mirrors of Flesh" proves the point that these guys are adhering to any  funeral doom mold. The clean vocals come in the second song, low and mournful, set against  angular guitar creepiness. At time this shifts into a more Ennio Morricone feel.

These guys seem pretty content with the downward path the are treading, as they are solidly keened into their own style, no need to add a black anything to their sound. The synth frequently take on a symphonic string sound, this creates a more gothic feel, in the same tone as say My Dying Bride, just less melodramatic. They utilize ambiance to good effect at the onset of "Pendulum of  Doubt" the vocal remain in the lower death metal register, though the do not carry the same gurgling resonance of say Loss or Mournful Congregation.They are more layered as the song progresses. Four minutes into the song , more dramatic My Dying Bride like vocals bellow in. The delivery is not as refined, but I admire the effort.

In the album's second half the songs grow more sprawling clocking in anywhere from 16 to 17 minutes. There is a very interesting morose melodic nature to "Triangle of Lies", just when I think they are going to veer into territory more similar to their country men in Negura Bunget, they wind around into something more gothic. It's when the get into the meat of this song that their sound begins to click with me.

The dark pageantry continue to unfold, with the piano line and violins, that weep out from the cracks of "The Horrific Pale Awakening" that is the albums lengthiest track at almost 18 minutes. All the layers, while might seem over wrought to some, do keep the epic spanning songs from becoming dull. After the first four minutes the song begins to loosen up. There is an almost Esoteric abstraction, in the way the wandering jams of these songs branch out. Six an a half minutes in you begin to wonder how will these guys keep your interest for another twelve minutes. They let the keyboards take over and drift into angelic waves. They storm back in at a more occult death metal pace, before drifting off again in another direction, almost like prog. The song washes back an forth like a tide. The death metal influence takes precedence here, though sprinkled with some pretty chilling solos. The bottom totally falls out in the songs final three minutes breaking down to a whisper, where it becomes the first time I can really hear the bass, before the keyboards create a more pip organ sound.

The primordial sonics that bubble up from the lower depths of the graves the band crawls out of to find melody in the strangest place. Sometimes the clean vocals take on almost the ghostly groan of mid range King Diamond. The requiem's for humanity ache on, finding their most inspiration in the more melodic passages where they have room to flourish. The compositions are allowed to transition in a pretty organic manner, none of the changes are that jarring or forced sounding. The keyboard parts are designed to give the band time to transition. When the more suicidal black metal screams of anguish caw out, this is the only time I hear the dissonance found in black metal.

The more gypsy like feel of their homeland peek out from behind the toiling riffs. Overall they maintain the sound they have crafted, with only a wink in the direction of  Transylvania, even when creating keyboard landscapes that could double as horror movie soundtracks. The growls also begin to find more variety the deeper into the album you sink. "Embrace the Earth" wraps up this epic album with the organ keyboards. A minute and a half later the chorus of clean vocal chants beckons. The death gurgles growl up from under this dismal display off power. Some cool clean yet creepy guitar uncoils as the final moments of the album draw near, building up into a chug, that fakes you out when the band collapses back down into a more doomy pace. The dissonant strummed guitar seems like an odd choice to bring closure, to this but many weird choices have been made here.

I'll round this up to an 8 because, I generally like what these guys are doing, I thik with better production that would thicken the guitar sound , this album would be even better, but I hope I can hear this fully realized from the band in the future, some of the sprawling keyboard sections could have been reined in but overall I think this album works as they keep you listening as the songs shift slowly under your ears.