Up From the Underground : Chuckie Campbell-"More Die of Heartbreak" 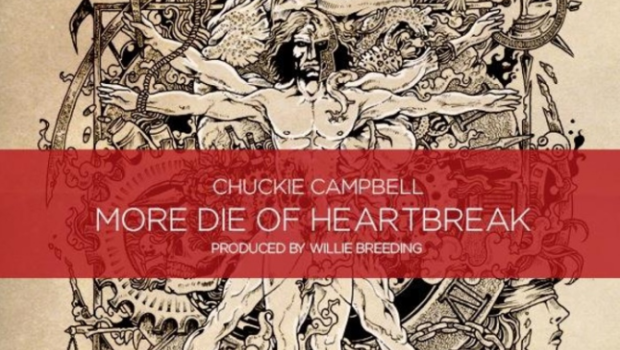 Honesty is something you can't fake.  Most rappers these days are driven by an ego persona.they play and have nothing to say, because they are writing in character.came out So a rapper who is just being himself and putting back the pieces to a life that has been broken and created using his art form is rare. This rarity just became reality on the new album by Chuckie Campbell.
<>The opening track "Speak" holds a dreamy quality to it ,the song is string heavy, allowing  Campbell's lyrical flow to hold more of a poetic quality than commonly found in hip-hop today. The darker under current bubbles out from the smooth backdrop on "Behind Her Eyes" . The beats continue to be understated, the strings turn to a more minor key not unlike some of the soundtrack work Phillip Glass has done.

Lyrically these bleak vignettes are snaps shots  of pain that is behind the closed doors or the big city. I don't think I have heard a rap album that is this intimate, Atmosphere is the closest that comes to mind when measuring the raw emotional honesty.  Unlike Marshall Mathers who adopts a victim role to over-dramatize, the sense of theater here is subdued. The hooks on the chorus of  "All I Meant" keep the mood established, rather than trying to steal the show and turn this song into a pop hybrid.

The pace of  his lyrical meter picks up a brisker pace on "How to Know When". The urban narrative shifts to a more introspective autobiographical  tone.  Producer Willie Breeding handles the vocal hook here and the song balances the propulsive flow with a dreamy quality.
The backing tracks have a more organic feel to them than any rap projects since the Roots or A Tribe Called Quest. The piano chords ring out mournfully under the social commentary of "Synesthesia" keep a gray cloud over the speculation of color in today's world.

The pulse of "Father's Hands" is the album's  first electronica laced moment. The synth melodies build the album's most memorable chorus. Here the family dynamic is explored in a similar manner Tupac's ode to his mother, but Campbell looks the greater impact of  ripple effect to this relationship. The album gets more adventurous as it progresses , the piano riff to "Deus Ex Machina" brings a centerpiece to the more abstract elements of the song. Campbell's lyrical approach becomes more aggressive to create an almost trap music like element.


The album's most anticipated moment the guest appearance by Wu-tang's Cappadonna, lives up to the spot light and is a tightly woven song, that doesn't rely on the rap royalty with Campbell's rap holding it's own against the veteran's, which if there is any justice in the universe should solidify Campbell's place among the rap greats of today. He has a life full of  experiences and observations to rap about rather than just ego based exhalations.

The strength of what Campbell does is highlighted on " Ancient Astronaut Theory" is his ability to create a seamless flow over unconventional rhythmic patterns and sounds. This sets him apart because he brings to the today something that is not already being recreated on every corner of the ghetto, but a desire to push his message forward in a innovative fashion. \

The jangle of indie rock guitar gives way to an almost Yeah Yeah Yeahs like groove, this is fitting giving the song's hipster trend call out. These are my favorite lyrics because it takes me back to when rappers would call each other out to create a sense of quality control so every one who stepped up to a mic kept their game tight as to not be drawn into ridicule for creating a faulty product, which is one of the elements missing from the industry today.

The lush organic elements that started the album come somewhat full circle on the title track that closes out the album, until an almost country hook surfaces on the chorus. I think it's a perfect way for the album to close. I'm pretty impressed with this, Death Grips was the last hip hop artist that did anything for me and this album is like a breath of fresh air for hip-hop and I hope it receives all the accolades it has earned from being so masterfully crafted and honest.