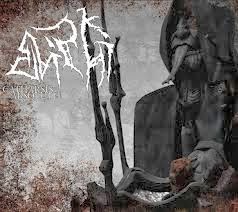 The 2011 "The Devil's Fractal " was pretty impressive , so this one man band out of Chicago has the bar set pretty high for it. Aamonael also works with Lord Mantis and played guitar for Nachtmystium so it more than capable of creating some next level blackness. The album opens with a piano ditty, before bursting into "Flames in My Eyes" which sees this project taking a darker, rawer and more chaotic turn.

The big change is the use of more clean vocals which are a lower baritone chant or croon. This gives the album more of an Emperor feel and more ritualistic element. "Light Weaver" is blast heavy but finds a more melodic guitar phrasing, that is pretty damn catchy when the drums latch onto the the groove. Aamonael does not feel the need to really pay much homage to his past associations as this song feels more like Watain to me than it does Nachtmystium. Though coming out of the chorus there is a slight Nachtmystium feel to the triumphant march the guitars take.

A doomish lurch hovers over the opening passages of " Voice of Intuition". The guitars are notably melodic and smartly played , though not as much emphasis is played of jarring technique. The pace picks up and the vocals drone on chant in the background. The  vocals do return to a roar for a moment here and there.The guitars are dense and well layered with subtle melody.

The 12 minute "All Gods Fall" is the album obligatory epic, which all black metal seems to have these days. From the drone , unfolds a sinister riff that recalls the more depressive side of black metal. The vocals have a very Emperor feel to them, so in some sense that would be by proxy a King Diamond feel, to the mid range moan. Surprisingly the song stays on the one epic riff the drone builds up to, which seems to work though I would expect a more dynamic range in twelves minutes ,particularly after the ever shifting landscape of riffs "
"The Devils Fractal" explored.

Oddly the seven and a half minute title track that closes the album is just a piano ditty that serves more as an outro than an actual song. So this album when stripped down to the actual songs is pretty to the point ,as a songwriter Aamonael  keeps it simple focusing more on the layered guitar melodies and vocal nuances than trying to show off. I'll give this one an 8.5, as its quality melodic black metal that's not afraid to warp the mold.