Thee Silver Mt Zion Memorial Orchestra : "Fuck Off Get Free We Pour Light on Everything" 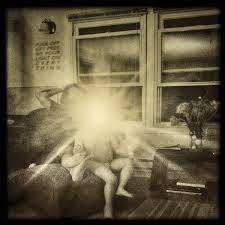 Right off the bat I like this album better than what I have previously heard from this post- rock collective. The vocals sounds like a drunk and rowdy Robert Smith. The song is darker , though it has a parade like fee, though much more like this marching band stumbling out of the loony bin.The Godspeed You Black Emperor ! connection is much clearer.

Not sure that "Austerity Blues" is really blues, it is more stripped down and centers on the vocals that are bathed in dissonant guitar that builds in intensity around the four and a half minute mark, not unlike mid-period King Crimson. Comparisons could also be drawn to Wovenhand in the way the song carries its droning groove, though the bass line is more in your face.It does feel like there is a whirling dervish like jammy feel to the songs.

They take another stab at their middle eastern version of the blues on "Take Away These Early Grave Blues" that is like Robert Smith sitting in with Swans. Its powerfully preformed and hits the sweet spot being as sonic in its heaviness as it is bludgeoning. This being said it is not metal by any means.

"Little Ones Run" is more of an interlude, before the very moody lament of "What We Loved Was Not Enough" though the vocals take on more of a whine they sounds less like Robert Smith and more like Arcade Fire. This album doesn't know its a goth album but it is. The use of a string section is done more mournfully here than with Godspeed. The song breaking down to end with the ebbing chorus feels very Arcade Fire as well to me.

"Rains Through the Roof of the Grande Ballroom" feels like an outro rather than a song that is meant to stand side by side against these other magnificent compositions. I'll go ahead and give this one a 10 as I am not counting the more interlude like songs for the purpose of scoring this as it lives up to its ambitions in the big way and creates music that is largely very original.