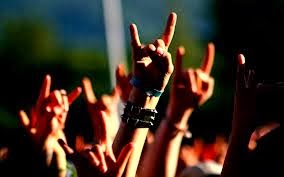 OK we have been back at this for a few installments , so we are re-acquainted  with me hitting shuffle on the old iPod and reviewing the first ten tracks that pop up.

Now that they have broken into the mainstream we can't forget what put them on the map and when they were more black metal than shoe-gaze or post rock. The song still rips pretty good and this album has stuck with it on my iPod to stand the test of time.

Alice Cooper -Who Do You Think We Are

Like disco Kiss  and Vegas Elvis , I have a thing for New Wave Alice Cooper, it much better than the cock rock years. Its smartly written , surprising as when these albums come up in interviews he claims to have been too drunk to remember making them.

Watain - I Am the Earth

Some older Watain , Erik growls a little more here than the more shouted Bathory style approach he began using more after this album. I can hear the Dissection in the guitar melodies.

The Mission UK marched on with this album which retains every thing that makes them great , the emphasis being on the guitar tone, the drums are a little thin and programmed sounding here. The background vocals oohs, remind me of Sympathy For the Devil.

The Smiths - This Charming Man

I would go out tonight, but I haven't got a stitch to wear, is a classic line to a classic song that shows both sides to the enigma that is Morrissey and the bands skips along with him , creating the juxtaposition that is often the Smiths.

This is barely metal if at all and I have a bad feeling the new album will step away from this even further. Though this might play to the bands favor in record sales. For post-rock a genre that forsakes vocals , this makes a good case for them.

Tears For Fears - Women in Chains

A great song , but the title is more exciting than the lyrical content of this soulful ballad . One of the bands greatest performances. It's chill inducing when he belts out the "and I feel lying in waiting is a poor man's game " line.

Thin Lizzy - Killer On the Loose

Sometimes the singer reminds me of a cab driver from Jersey. They are full of great guitar playing even if this song is straight ahead rock a shade lighter than Motorhead.

I could give myself a head trying to count straws and figure out if this is black metal or Swedish death metal. They have the very melodic guitar but unlike their limp wristed country men in the genre, the give it more teeth and attack. Jon's vocal's have a meaner sneer than death metal in it's rasp. These guys are awesome anyway you slice and Watain is the only band that has been able to carry their flame.

I think the fact these guys are still in my iPod attests to the fact  I have gotten over the fact they are not called No Youth and I am able to embrace the dark sonic wasteland they call songs.The agony in this guys singing voice is great and adds to the song's bleakness.
Posted by Wilcifer at 8:58 AM