Woods of Desolation : "As the Stars" 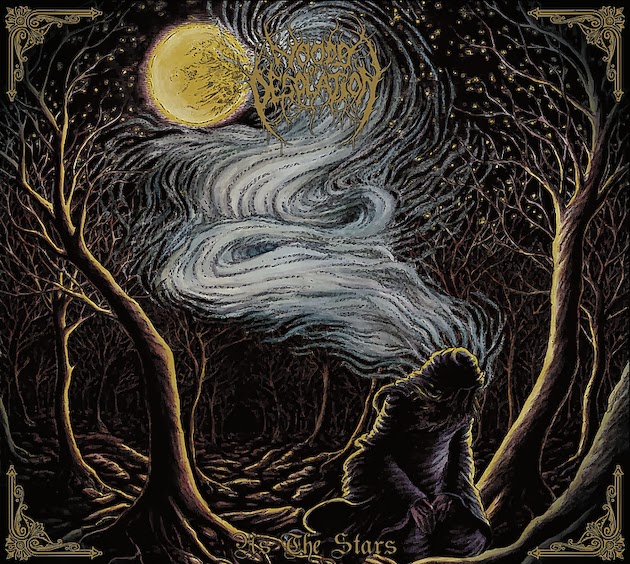 The colder it gets out side the more black metal I want to listen, so its surprisings this rather frosty blast of cascadian black metal comes from Australia, On their third full length the project has matured to achieve a much fuller sound.They are not merely trying to recapture Transylvanian Hunger here, but have captured a hypnotic drone, more like Deafheaven, but carrying more majesty in their metal mesmerism.

The album still retains the raw sound of their early work, but they have expanded the dynamic range of the guitar which reaches for more of a shimmer on songs like "Unfold". At times this more expansive focus on the guitar comes with the sacrifice of the vocals, that in turn get buried into the music. The vocals when they become audible sometimes take on more of a Bathory or Mayhem like quality falling somewhere between a gurgle and a drunken roar, which is a needed change of pace to keep them from becoming Deafheaven clones.

The sonic growth this project has made sometimes requires furthering listening to soak in. "And if All the Stars Faded Away" the pace slows and the guitar takes on a jangle of delay and octave chords before throwing the songs final minutes in a bath of blasty mcnasty. They charge forward with a heavier attack on "This Autumn Light" , which is more straight forward and less apologetic to being metal.

There is surprising groove to "Anamnesis" that is not unlike some of the more recent Enslaved, though without the prog leanings.The album's greatest strength the is range of moods presented and sonic colors these songs are painted with.Even the vocals vary their harsh approach slightly from song to song, taking on a more desperate snarl on "Withering Field".

The albums closes out on the triumphant blast beats that swell up at the end of "Withering Field" but this seems  a well earned outburst after the journey this album has taken us on. I'll give this album a 9, it was a pleasant surprise and provided a perfect balance of  being heavy sonically as well as being heavy metal.