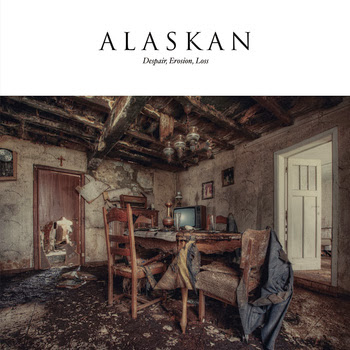 This Canadian three piece has heavy buzz surrounding their second full length. The bulk of this buzz is warranted for the churn out a dynamic brand of sludge core that flirts with drifts into post rock, though the emphasis of this album is density rather than ambiance. They open their album with one of the albums most diverse offerings in terms of the spectrum of guitar melodies that hover over the din.

They create that sweet spot balance off sonic space and hanging on a hypnotizing pound, showing their are more roads to heavy than just metal. This is not to say despite all the eerie drones, that this album doesn't deal out its fair share of punishment to your ear drums. By the second song "Fiend" the despondent chords give way to a more brawling brawling rumble, that is sometimes angular and jarring like the more bruising bands from the Amp Rep days. The bass player frequently kicks the door down and barrages in with an aggressive bottom end. This leaves the guitars to tow the line when it comes to providing a dynamic juxtaposition and take the more soaring sections.

The top notch production,pushes this album to the head of the pack. All the instruments sit right where they should, even though there are many layers, the pristine sounds are not cluttered. The thick wall of guitars on "Inferno" retains an organic warmth among it's battering ram power, it doesn't rely on over driven trickery, but captures what you might imagine their live volume to be. Tempo wise the songs don't crawl, but stomp ahead at a powerful mid pace. This allow the punches to stand out and the syncopated part to become more defined.

My only complaint with this album is that the vocals sound like the barking was an after thought, yet this is largely forgiven due to the music they sit atop. Though in some of the albums darker and more melodic sections, you can't help but wonder if another vocal approach might have maximized the effectiveness. Despite the lumberjack in a pain approach, songs like "Submerged" cause in to translate into more of a steroidal Planesmistakenforstars or a less soulful Hotwatermusic, even though these guys are no where near to a being punk rock. Even with the brief blasting sections , this album never tries to be blackened anything, and these guys are secure in who they are and what their end game is.

The Planesmistakenforstars comparisons are given more weight on "Guiltless" as chords ring out to bathe the song in dreary atmosphere. This reprieve is short lived, as the albums more post- hardcore moment brings the song to a crescendo. This album is like the hardcore version of depressive black metal.The heaviness is an emotional one and the mauling melancholy is what makes this stand out to me.

Assigning the myriad of Labels and adjectives to what is going on here missing the point that this album lulls you into the storm for countless listens. I'll give it a 9.5 as the vocal approach here holds it back from being perfect, as all throaty roars here sound the same.