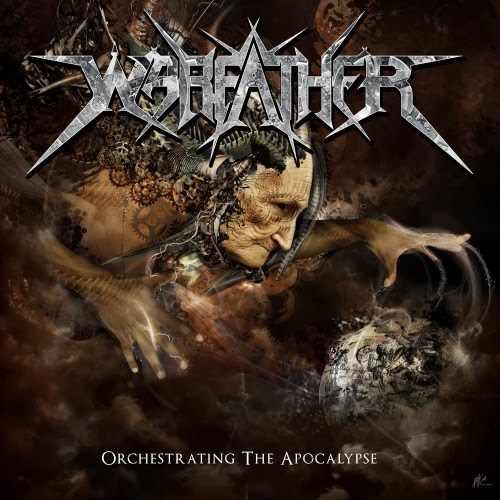 I guess Culted was the first release of 2014 I reviewed on here making this the second. This band is the vehicle of Steve Tucker the one time replacement for David Vincent, and more often than not this reminds me more of Deicide than Morbid Angel in its straight ahead attack though by the middle of the first song I can begin to hear it. It is pretty one dimensional, I guess I have been spoiling myself by listening to such experimental death metal that when it comes down to really meat and potatoes fare like this. The riffs are mean and this is not sloppily thrown together by any means.

Like Deicide the songs are tight and to the point a quick brutal blast and its hit and run from there. The drumming is pretty decent as death metal has to be , the drums could have used a little more boom in the mix. "Legions' has a pretty good groove towards the second half and Tuckers sticks to his lower Vincent impersonation.  They tend to go right for the throat not really dabbling with the sonics of their attack until ' the Shifting Poles". The riff here is the most intricate in the albums first half and the swells of siren like keyboards sweeps in to haunt the song. This is the first song that I really like on here where the others seem like they would have to grow on me. This does sound more like Morbid Angel than Morbid Angel currently does.

The fast and furious "Waltz of the Solstice"  beats the bloody meat of it's raw snare hatred. I can hear the Behemoth influence on this song, the riffs break down and the choral synths ride over the groove, but the riffs are not as thick and groove heavy as the Polish bands. Hearing this for the first time  I find myself looking forward to the new Behemoth. The lyrics sound like Tucker is just growling off a list of black metal album titles. I do like how the shifting riffs modulate to allow room for the solos so they sound like they are a part of another movement and not just blasting out over the riffs for no reason.

The speed is maintained on "Ageless Merciless" , the thing that stand out about this song to me are the effects on the vocals , which sound like Tuckers find his own voice using them rather than filling Vincent's shoes.The vocal layering in the songs final minute is pretty cool and sounds like someone is falling down a long hole to hell.

He is not the only fan of Morbid Angel in the band as the guitarist learned those weird harmonic sweeps that Trey does. "Gods and Machines" does capture enough strangeness in the periphery to no come off as much of a Tampa clone. The guitarist begins to forget his voice that I heard earlier in the album as his solos kinda sound like stock death metal from the 90's.

The more Formulas Fatal to the Flesh sound really doesn't bubble up until "Ashes and Runes". The blast happy drumming feels like it is all over the place and the solos seems to flow free . The angry chant that brings the song back together comes midway through. This song is more technical than what we got from Morbid Angel. Some of the riffs don't sound like they have had enough thought put into the process of arranging them as the rest of the album. Their is a more cohesive and angry tone to "We Are the Wolves".This also reminds me more of decide , particularly in some of the more straight forward blasty masturbation.

Overall this tends to be too straight forward for what I normally listen to so I'll give it a 7.5 , but if death metal is more of your thing you can round it up to an 8. No new ground is tread upon here, but they are pro's at what they do.

LISTEN TO A NEW WARFATHER SONG NOW! STEVE TUCKER IS BACK!
Posted by Wilcifer at 11:50 AM