Up From the Underground: New Mongrels "Raised Incorruptible" 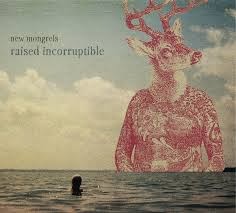 The idea first hit Haynes Brooke during the heyday of the Athens, Georgia music scene in the 80's where he stumbled across his grandfather's musical legacy. Now he has gathered this musical collective players ranging from the theater's of  Hollywood to the folk dives of  Atlanta to breathe new life into this legacy. It makes calling this band underground a bit of a stretch as Atlanta's contributions includes the likes of Amy Ray from the Indigo Girls and Michelle Malone. Their celebrity status however doesn't dominate the album.Ray's harmony vocals cut through the voices gathered here, but never does it lean back to much into the more hooked oriented singing that once cemented the Indigo Girls into college  radio play lists. The only moment that recalls the Indigo Girls is found on "Two Trees".

Brooke and drummer Ken Palmer demoed out the skeleton of these songs which the layers were latter fleshed out as this  creative collective captured an organic free flowing batch of Prairie songs tinged with Appalachian roots. There are moments when this album reminds me of the Grateful Dead's " Old and In the Way: album, not that it wanders off into jams, but it has a similar spirit to it.I can also hear Neil Young's influence haunting some of the more western campfire moments.

The albums benefits the most from the lush accompaniment of mandolins, ukuleles, accordions and trumpets, whose flourishes color the other wise stripped down acoustic instrumentation backing these songs. The albums touches on bluegrass, but never wanders into country.If that seems like a fine line, its made much clearer in the rambling nature the guitars roll with. The current hipster folk trend doesn't hold much common ground with this more effortless excursion, with the opening "Time" being the only really indie rock radio song here.

Lyrically these songs become thick with emotionally heavy story telling, the first half of the album has an almost old time gospel feel, before the become more revolutionary . The lyrics feel like beat poetry written by a stoned Tom Petty rather than a drug ravished Ginsberg  Less abstract than some of Jerry Garcia's musings, but full of similar scenery .

I think the high point to Brookes musical ability shines in the jazz embellished piano part to heal my heart, there is a rock guitar that emerges moments later and the song takes on a more Arcade Fire feel. Though not a rock album by any means its influence is an undercurrent as the male vocal continues to hold lingering David Byrne delicacy  to them on "Palm Point".  I think fans of Neutral Milk Hotel would find this album hits many of the same quirky sweet spots on songs like "Love it Madly", that also has a melody with hints of Supertramp to it.

The album closes with the instrumental " Tuborg Gold". It provides a scenic closure closure to an album that dips into a diverse mixture of sounds. This album would be the perfect sounds track to driving out of New Orleans headed to Hollywood while nursing a bottle wine and April morning buzz.If you have been cutting your teeth on the likes of Mumford and Sons and are ready to try something slightly more genuine this album is for you.