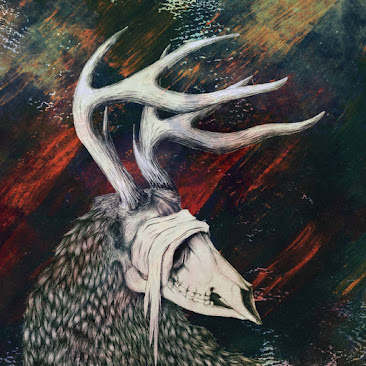 They throw a lot at you in the first song. It is a hybrid of hard core and shoegaze. More atmospheric than the last album. The hard core is even more in the forefront on the second song. The female vocals are better than the screamed male ones . Their is a higher guitar creating more of a sonic texture over all of this and not allowing it to become run of the mill hard core. The hard core side of the band bull dozes the shoegazing . The screamed vocals bear to wear on me with their uniformity. I do not remember that being a complaint for the last album.

The male vocals go into a more sung part that breaks things up. It seem all three members of the band sing  There is a more rock feel to " Silent Restraint" .  The lyrics to the shouted vocals can  take form with more clarity. The yrics seem pretty pissed. "What Was She Wearing" is more commited to being shoe gaze It also benefits from being a more nuanced song.  It does build up into the kind of atmospheric hard core they have been pounding us with so far .  They blast out in anger with "the Currency of Beauty"  .

I do remember last time noting how they sometimes share a similar sonic space as Deafheaven and that is what " Pearlescent" gets built up into. There is a poppy post rock opening before the explosion which creates a nice contrast. I like how the atmosphere has been dialed up on this album. I will give this one a 9 and see how it sits with me/.

Email ThisBlogThis!Share to TwitterShare to FacebookShare to Pinterest
Labels: "When I Die, 9, Hardcore, Svalbard, Will I Get Better ?"