Rumours : " Neither Innocent Nor Wavering" 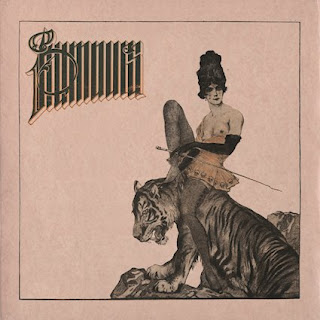 I suppose Blue Oyster Cult might be a good frame of reference for the shadows haunting the twin guitar attack this German band. There is a proto metal feel, with vocals that stand out as the are a dramatic baritone croon with balls to it. Not unlike In Solitude in many ways. On the second song they come even closer to being metal. They are really aggressive rock music. The vocals are forceful but still sung. There is a retro feel to what they do, but it works for what is going down here and is not like they are too focused on recreating a sound that they forgot to write songs. Though the vocal lines to the angrier second song are not as gripping as the first , the over all product is still pretty powerful. They cram plenty of guitar solos into this one with out getting lost in the shred.

Things get even darker on "Black Milk" thanks to the vocals that take a more emotive and tortured drama that borders on being goth, though they are not low enough. The guitars also have a more doomy tone to them, The song builds into a more explosive dyanmic . The vocals are more of a roar. Not punk at all , but that kind of energy of say the MC5. That was the longest song at almost 6 minutes.  It goes by pretty fast as it is driving. They make me eat my words to some extent with the punk thing on the last song as it does get closer to that sort of thing. If we are talking about when punk was more rock than not. The vocals are still very much sung and not yelled, making it more metal. I can say I like the first three songs better as they were darker and not as straight forward.

They do slow down to more of a doom tone and end the album on a bigger note, but the bulk of the song was too basic for me . It might grow on me and the first three songs were excellent. I wish this was an entire album rather than just a 4 song ep, but you take what you can get these days. I will round this down to a 9 due to the last song, but it 's generally a lot of fun and even that song is not bad it is just not at the level of the first three.