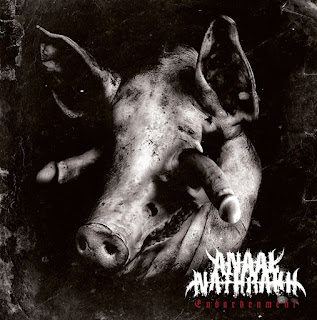 The crazed blackened Brits are back. They drums are more hammering than the rest of what they throw at you as the vocals are more like Devin Townsend in Strapping Young Lad. In fact a great deal of this reminds me of that band. I had to listen to the second song twice to figure out what happened in the blurred blasted blitz.  Like Emperor more melodic synths add melody to the background. These guys have a more feral grind core attack to what they do than Emperor.I feels like more of a sound than a song. The uniform approach to the double bass that is the main driving facotr behind them also creates avibe that makes the songs sound the same. This is more pronounced than I have heard from this far in their career.  They do give a little more space to "the Age of Starlight Ends" .  The guitar solo is pretty melodic , but do not let solos dictate everything.

There is a more machine like djent feel to " Libidinous" . Not the first time we have heard them dip into this sort of sound. High pitched falsetto vocals help to further sell this song. The double bass patten is also changed up a little . The more industrial strength thrashing of their brand of black metal gain thunder and menace with "Beyond Words" . It is more violent in it's intent , but with this comes also feeling less musically inspired. Yes they beat ypur ears about, but is that something you want to return to ? Maybe two songs up tp this point have realy felt like songs, the rest is a buzz of  nasty riffs. I am sure some people will say do not teach this new dog new tricks, what that hath wrought is an incredibly dialed in reliance on familar sounds to construct something so similar to their more inspired album that it might fool so people. The songs are so fast and intense they are not long.

Yes, they are every bit as feral as you want them do be. Is that all you want from music is the question that is most pressing. By the 6th song I am bored despite how good any solos might be. I like the song title "Create Art, Though the World May Perish" , it is the kind of bleak sentiment we need. The song is not great enough to live up to such an epic title, but it is better than most on this album. Not that the bar is high here. Where some of their albums have merely been more blackened with things like death metal and grind core taking front and center this album is more black metal. That does not mean more inspired. They have a hug guitar sound so with that said it's not the most cvlt sound. This album is more accessible to mainstream metal audiences. Things are less jarring this time around and there are plenty of melodic death metal like guitar lines. I will give this album an 8, it's well played and recorded, sounds great, song wise more obligatory stabs for the Arch Enemy crowd with black metal thrown in.