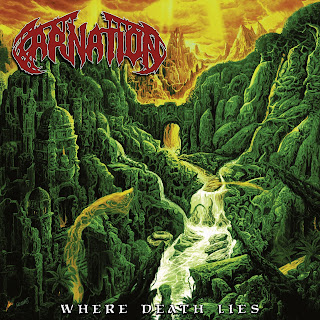 This band from Belgium smacks you in the ears going into their second full length. They remembered to write songs and not just battering you down with dense guitars. It's not a pure double bass fest either. Old school death metal in the apporach, but the production gives it a more modern sound rather than these guys just trying to dial in Tampa from the 90s. By the thirds song it begins to devolve into more of a speed fest. The second song was already not as gripping in terms of hooking me into it . They come back and add enough syncopation to "Spirit Excision" to avoid turning into angry chugged mush. Entombed is a fair comparison s to where they are coming from sonically. Enough other influence from bands like Bolt Thrower to keep them from sounding like an Entombed clone.

"Napalm Ascension' finds the rule of cool riffs alone do not a good song make. While it is more often than not just a speed fest, there are a few riffs here and there that are cool. "Serpents Breath" breeze by in a blur without really grabbing my attention. They do a little better in writing something more negaging on "Malformed Regrowth" . Is is me or did they use a death metal song name generator on Facebook to come up with these titles . The synths on "Reincarnation" were needed as they gave them a more melodic texture that helped break things up. This also causes them to sound more like Morbid Angel.

The last song "In Chasms Abysmal" things continute to improve. The riffs have more groove to them., There is a more melodic section in the end where they include actual singing. I will give this album an8. There is no question that these guys ae good at what they do. What they do can just be too straight forward and speed focused for me sometimes. It doesn't mean there are not some good songs on this album,. for than half of these songs are great , the rest are not my preference which is why I am giving it such a high rating, as instead of telling you to round it up, I did the math for you. Being released on Season of Mist.