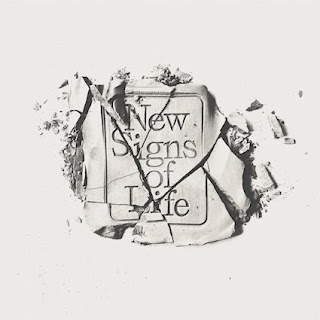 I thought about holding off on these guys til Gothtober, but they are much closer to being a newer fresher version of Interpol than anything spooky. They are great song writers and while they have a very focused and intentional sound they still care about the songs. Not as stark and monotone as Ian Curtis. The grim narrative of their singer doesn't add as much melody as the other instruments. The titles track find them relaxing from the tension that drove the first two songs and allowing the singer to croon in a little more of a Killers territory, but without the pop radio aspirations. It is a moody picture they paint which is darker than your average indie rock , band and dark enough to warrant being called post -punk, but darkness is not the main color the draw from as there are traces of hope.

Things get somewhat upbeat on " Web of Love" .  Not to the extent of say the Drums who make more sunny beach music, it's more of a drizzle at the beach sound. I become a little less engaged for their sound becomes more familar and less unique. The mix is very clean and spacious. This lends a song like " A Different Kind of Happy" which has a brighter mood, similar to solo Morrissey in the sonic place it occupies. Obviously this wins me over. The saw that comes in reminds me a little more of Roxy Music. Though they lack the artful ethereal nature of Roxy Music. They stay on this more melodic path with "Alison". There is a more rock n roll feel to the maringally more distorted guitar of "Sacred" .

There is a more deliberate chord progression that reminds me more of  the mellower moments of the Velvet Underground on " Shot Down". It is however not with hooks . I this album serves as another example of how sounds are influenced by their geographic enviroment. Both Austrailia and California both have an abundence of sunshine , yet this album cleary has a sound that is more California . I will give this album a 9, it might be a little too happy for my normal listening, but I appreciate what is being done here as the album sounds great and well written so it is certainly a triumph on their end , I thinkfans already along for the ride will still appreciate what is being done even if it is not as glum. Coming out of Dias Records